Ireland: The pope’s requests for forgiveness failed to salve the wounds of abuse victims

Pope Francis may have been begging forgiveness at a mass in Phoenix Park, but just four miles away the banners at a protest rally in the heart of Dublin rebuffed that request with short, sharp slogans. 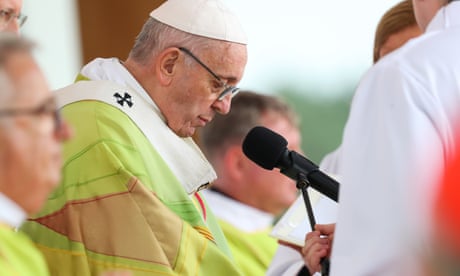 “Hey Pope Francis you’re outta chances”, “The Pope is a dope”, “The Pope is protecting paedophiles”, “Religion is fine, rape is not”, “Repeal the church”, and, perhaps most cuttingly: “The church way worse than the Brits.”

The anger, pain and defiance expressed on Sunday made clear that the pontiff’s two-day visit to Ireland had not salved the wounds from clerical sexual abuse and cruelty in Magdalene laundries and other institutions, at least not for the several thousand people gathered at the Garden of Remembrance.