It has been reported in the news reports that between August 2017 and October 2017 more than 7000 Rohingya Muslims of Mynamar (Burma) were massacred, tens of thousands have been displaced from their homes, raped, &amp; brutalized. More than half a million have arrived in Bangladesh as refugees. Most of them are living in makeshift tents, mostly malnourished and destitute. This was an unparalleled mass exodus.

International aid groups and human rights organizations have described these people as the most persecuted community in the world. They are denied citizenship in Mynamar, have no legal
recourse. They are denied education, freedom of movement and government jobs. It is no less than apartheid.

It all started when on August 25, 2017, the Mynamar military launched an &quot;ethnic cleansing&quot; campaign — something Myanmar leader Aung San Suu Kyi has denied — against Rohingya Muslims. 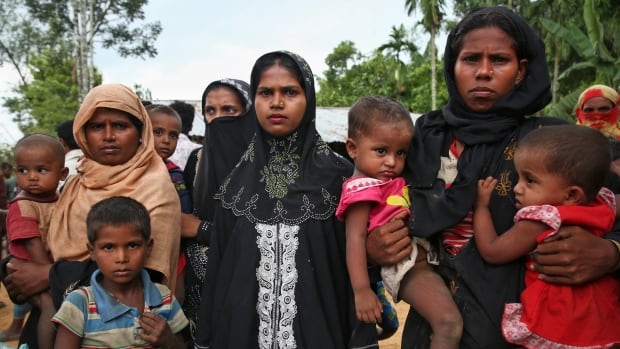 This happened a week after Rohingya rebels attacked military base, police barracks, and border guard posts, killing at least 71 people. The attackers were members of the Islamist Arakan Rohingya
Salvation Group (ARSA). Some of these operatives likely received training in terrorist camps in Pakistan and Bangladesh. Al-Qaeda has called upon Muslims to aid their fellow Muslims in
Mynamar.

Rohingya claim that they have lived in western Mynamar for over 1000 years with a strong influence from Mughals and Portuguese. Yet the Mynamar government says they are illegal immigrants from Bengal, mainly from the Chittagong region, who &quot;moved en masse into western townships of Arakan&quot; during the British colonial rule.

The British colonial government organized a mass migration of Muslims from the Bengali-dominated region (Bangladesh) to what is now Rakhine province. Before the independence of Burma in January 1948, Muslim leaders from Arakan approached
Muhammad Ali Jinnah, the founder of Pakistan, and sought his assistance in incorporating the Mayu region to Pakistan considering their religious affinity and geographical proximity with East
Pakistan.

After this the North Arakan Muslim League was founded in Akyab.
Investigators from the UN have found evidence of increasing incitement of hatred and religious intolerance by &quot;ultra-nationalist Buddhists&quot; against Rohingyas while the Myanmar security forces have been conducting &quot;summary executions, enforced disappearances, arbitrary arrests and detentions, torture and ill-treatment and forced labour&quot;. According to the UN, the human rights violations against the Rohingyas are &quot;crimes against humanity&quot;. Buddhist-Muslim tensions have
reached a point where Buddhists accuse the Muslim Rohingya of raping and murdering Buddhist women.

Relief agencies estimate out of 1.1 million about 300,000 people remain in Rakhine province in western Myanmar, including about 180,000 people in the mainly Muslim north, but no one is
moving around. Among the survivors, many bear bullet wounds and marks of sexualized violence, and tell of murder and arson committed by soldiers and vigilante mobs. Around 60% of the
displaced refugees are children. In August, 2017, the Myanmar security forces began an operation against the Rohingya in Rakhine
province.

Myanmar military—teaming with local authorities and unruly mobs and goons of Rakhine Buddhist civilians—launched massive reprisals that it described as its anti-terrorist &quot;clearance
operations&quot;. According to reports 176 ethnic Rohingya villages—out of the original a total of 471 Rohingya villages in three townships—had become empty. In addition to the 176 &quot;abandoned&quot; villages, some residents reportedly fled from at least 34 other villages.

A Vatican diplomat stated that at least 3000 people were killed by Myanmar security forces in August and September 2017, in
fact the figure is now close to 7000 deaths. About 300 Rohingya Muslims a day still cross the border from Rakhine State to Bangladesh, international relief agencies report, swelling a population of nearly 650,000 Rohingya Muslims who
have fled to Bangladesh since August 2017.

The refugees are cramming into squalid camps of improvised shelters that lack basic sanitation. According to news reports despite sporadic violence, the main problem fueling the Rohingya exodus is not continuing attacks, but a combination of pervasive fear, deep anxiety about the future and a lack of basic services.

Nobel laureate, Aung San Suu Kyi, a civilian leader, criticized the media's reporting on the crisis, saying that her government is protecting everyone in Rakhine province and argued that the
reporting was misinformation that benefitted the aims of terrorists.
In November 2017 Bangladesh and Myanmar governments agreed to start repatriating Rohingya refugees in two months, as global pressure mounted over the refugee crisis.

After weeks of tussling over the terms of repatriation, the two sides inked a deal in Myanmar’s capital Naypyidaw following talks between Aung San Suu Kyi and Bangladesh Foreign Minister A.H. Mahmood Ali. A working group was supposed to be set up within three weeks to agree to the arrangements for the repatriation.
Human Rights organizations have raised concerns about the repatriation process, including where the returning people will be resettled after 354 of their villages pillaged and houses have been
torched and how their safety will be ensured in a country where anti-Muslim sentiment is surging.

Rohingyas have been target of communal violence and vicious anti-Muslim sentiment for many years in Buddhist Myanmar.
Pope Francis has been outspoken about his sympathy for the plight of the Rohingya. The situation of Ahmadiyya Muslims in Pakistan is very similar to Rohingya Muslims. Both communities have been persecuted in their homelands for years. Constitutionally Ahmadiyya have been declared non-Muslims, they cannot practice their faith, publish their books, call themselves Muslims or take part in the electoral process as full members of the society. Often they are targeted by frenzied mobs that are bent on killing without any regard for human life or sanctity of life.

Religious fanatics and clerics have declared them –wajib al-qatal- one who can be legally killed with impunity. Ahmadi Muslims live in Pakistan under constant threat and in an atmosphere of bullying.
In view of the appalling and worsening situation in Pakistan, with extremism on the shocking rise, mobs and megalomaniac clerics breaking laws with impunity, declaring anyone Muslim or Non-
Muslim, thousands of talented Ahmadiyya Muslims have been forced to take refuge in Europe, Canada and the US.

It is doubtful whether Ahmadi Muslims who have emigrated on account of
persecution will ever repatriate to their homeland?
United Nations and human rights organization must express their concern for the sorry plight of Ahmadi Muslims as they have for the Rohingya Muslims. They must demand that Pakistani blasphemy laws should be amended, and all citizens must be able to practice their faith without any legal threat and constitutional change. 258 innocent and peaceful law-abiding Ahmadis have been
martyred from 1984-2017 for their beliefs.

By all counts it seems no less than apartheid against this minority which was at the forefront for the creation of Pakistan.
U.N. High Commissioner for Human Rights Zeid Ra’ad Al Hussein recently said he is not ruling out the possibility that genocide charges will be levied against either Myanmar’s de facto civilian leader Aung San Suu Kyi, or army commander Min Aung Hlaing.