View from Turkey: Saudi Arabia plays with fire by counting on US 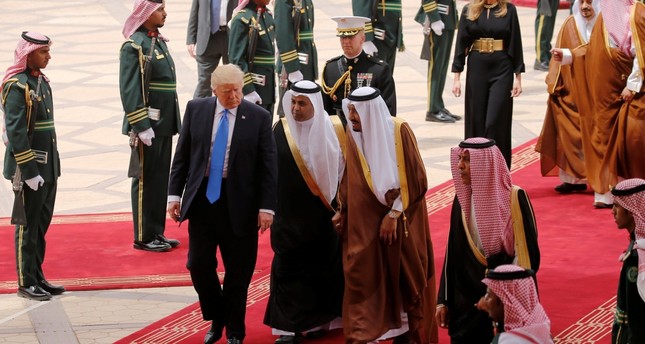 Saudi Arabia’s King Salman (C, in brown and white) welcomes President Trump with a military honor cordon after they arrived the King Khalid International Airport in Riyadh, Saudi Arabia, May 20.

The Saudi ruling family picking the U.S. as its main partner causes irreparable problems in both the Middle East and Gulf specifically

The Arab Spring called into question the legitimacy of the order and deeply rooted structures of the Middle East. Although the Saudi royal family initially supported the uprising in Syria, they subsequently withdrew their backing after becoming perturbed by the possibility of an attitude that may lead people to question the royals’ ruling legitimacy, a valid concern. Afterward, Iran progressed in Syria, while Lebanon achieved full sovereignty, deployed in Yemen and started to pose an immediate threat to Saudi territory, raising alarms for the ruling family.As with the latest elections, Saudi Arabia seems to have yielded to the formula: “Only oppressive forces can obtain results in the Middle East.” As a result, the Syrian opposition was left completely alone while hundreds of religious functionaries were jailed. Later, they targeted the Muslim Brotherhood and Hamas, while developing closer ties with Israel.

Then, they tried to implement the obsolete project referred as “reforming Islam” under the name of “moderate Islam,” which was tried numerous times but always resulted in failure. Dozens of influential Saudi citizens, including relatives of the royal family, were jailed and their properties confiscated as part of an unprecedented purge. Lately, some fatwas stating that resistance to Israel is not permissible and that Hamas is a terrorist group were issued by the grand mufti of Saudi Arabia. Apparently, Saudi Arabia has accepted Israel’s arguments contending that there cannot be a sovereign Palestinian state.

In so doing, the Saudi ruling family broke many hearts among their people, while losing the neighboring Muslim countries’ benefit of the doubt. The kingdom seemingly thinks that its partnership with the U.S. and Israel is sufficient to walk down this path. Unfortunately, they are making a big mistake.

The path to fight Iran’s expansionism does not need to involve punishing the Muslim Brotherhood, one of the crucial components of the Sunni’s line of resistance. Neither does it need to subjugate Qatar or exclude Turkey. Even if they cooperate with the U.S. and Israel, they must still cooperate with these actors. Otherwise, a mindset that bans resistance to Israel would cement the view that Shiism is the defender of Jerusalem in the Middle East.

In Turkish, we have a saying that means, “a true friend tells the painful truth.” If Saudi Arabia still considers Turkey a friend, they should pay heed to the country’s warnings.