New York: a rabbi, an Imam and a message of inclusion at Muslim parade

At about 1 p.m. on Sunday, Diakita Amadou burst out the doors of the hotel he works at on 38th Street in Manhattan and took off. He had heard the adhan, the Muslim call to prayer, echoing through the lobby, and followed its song.

At Madison Avenue he stopped. Scores of fellow believers were prostrate in the middle of the avenue, praying before the start of the city’s Muslim Day parade. He slipped off his shoes and joined them, bowing low.

“To see the Muslims like this in the middle of the street here, that means Muslims have some consideration, that we are being given a chance,” Mr. Amadou, 45, said. “That’s New York showing us a little bit that Muslims have a right, just like other people.”

That message of inclusion was writ large at this the 32nd iteration of the parade, which for the first time had as its grand marshal a rabbi: Marc Schneier, the president of the Foundation for Ethnic Understanding, a group that works to bridge divides both religious and secular.

Along the avenue, floats bearing dancers and sparkly replicas of things like the Dome of the Rock, the central mosque in Jerusalem, readied for the parade to kick off. With his grand marshal sash across his chest, Rabbi Schneier stood chatting with one of the parade’s founders, Imam Shamsi Ali, and a Hindu priest.

“This can serve as a wonderful paradigm,” said Rabbi Schneier, an activist who in February held a rally in Times Square following President Trump’s ban on travelers from several Muslim-majority countries, under the banner, “Today I am a Muslim Too.”

The parade was founded as a means for Muslim New Yorkers to assert their place in this city, said Imam Ali, the president of the Muslim Foundation of America.

“This is a city of parades,” said Imam Ali. “We felt we must express ourselves as an integral part of the city. Parade is part of the New York identity.” 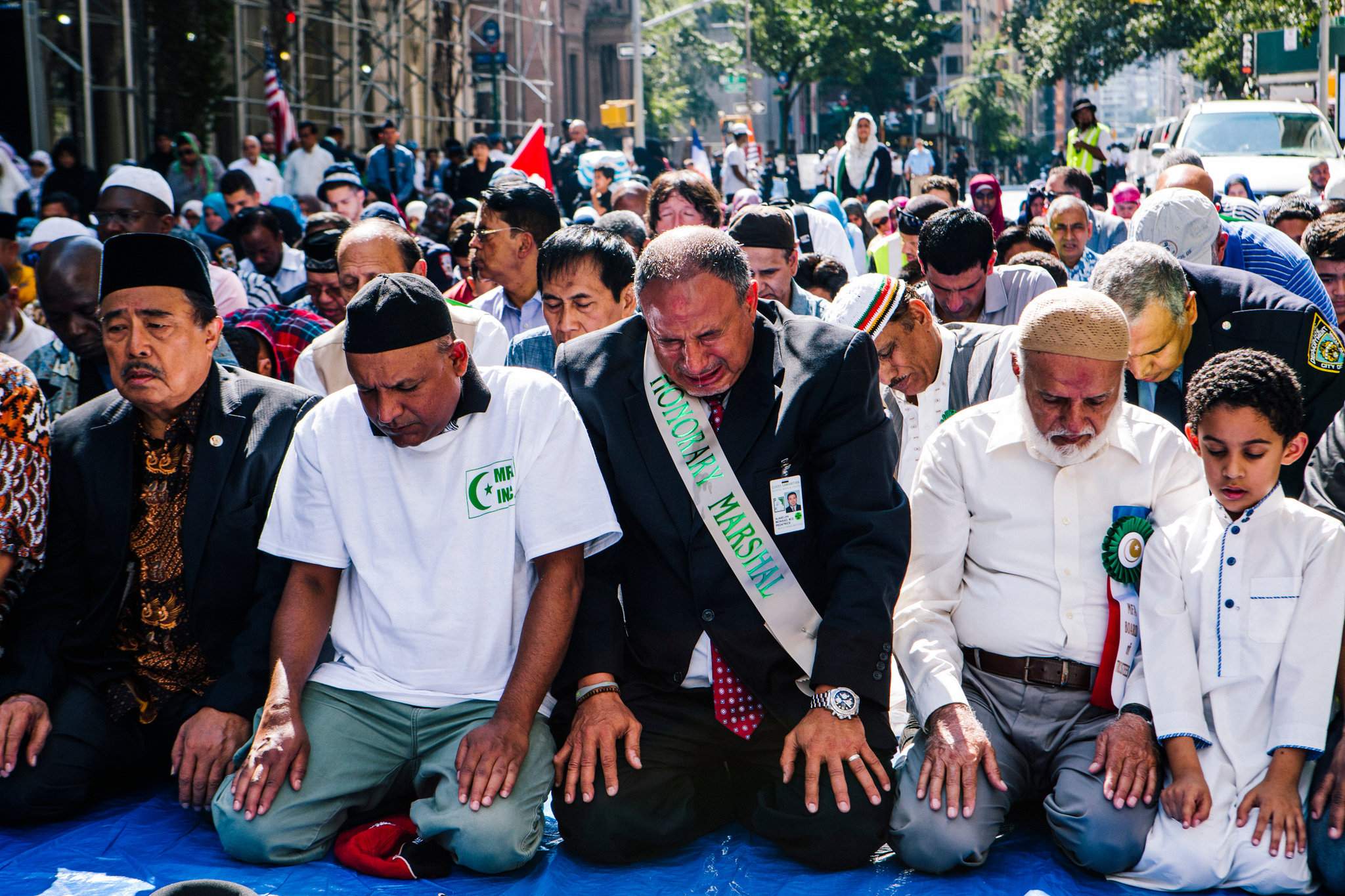 Another honorary marshal, Alaaeldin Moawad, cried during afternoon prayers before the start of the parade in Manhattan. Credit Mark Abramson for The New York Times

Over its three decades, the parade’s political resonance has been in constant change. In 2001, it was canceled after the Sept. 11 attacks; in 2002, it marched on, but the crowds were thin, Imam Ali said, as anxious past participants stayed home in a time of cresting Islamophobia.

On Sunday, amid a national climate where every group seems to be under attack, the parade transformed into something of a solidarity march.

The decision to tap Rabbi Schneier as grand marshal, Imam Ali said, came after the violence in Charlottesville, Va., where white supremacists marched this summer, shouting slogans against blacks as well as Jews, resulting in riots that left one person dead. It was decided then that this year’s parade must also be a platform.

With an accompaniment of drums, Muslim officers from the New York Police Department marched in formation. The parade route to the Flatiron district was thinly attended, but at points spectators called out their thanks.

While there were a few protesters along the route, Imam Ali welcomed them as “Democracy in action.”

In a cluster on 38th Street, Mulhat Kahlef, 21, a home health aide from Queens, stood taking a selfie with her friends and family in their colorful hijabs, waving small American flags. The elements of shared faith between Muslims and Jews, she said, made the rabbi a perfect choice for grand marshal.

Each morning, get the latest on New York businesses, arts, sports, dining, style and more.

You agree to receive occasional updates and special offers for The New York Times’s products and services.
https://www.google.com/recaptcha/api2/anchor?k=6LeN0R4TAAAAACwPa5WX2QYE0npOf2-2veTOm2Tp&co=aHR0cHM6Ly93d3cubnl0aW1lcy5jb206NDQz&hl=en&v=r20170919161736&size=normal&cb=mpucw331j32s

The group used to come to the parade for fun, Ms. Kahlef added, but in this year of travel bans, they came to make a statement

Just down the street, selling Bangladeshi, Yemeni, Saudi Arabian and American flags along the parade route, Al Knight, from Brooklyn, was stunned by the choice of grand marshal. “The world looks at New York, we are the capital of the world,” he said. “If other countries see that, they might become a little more pliable.”

He was just there to sell flags, and neither Muslim or Jewish, but he was deeply proud. “This is good,” he said. “This is really good.”