The Jemele Hill story will not die, no matter how much ESPN wishes it would.

ESPN president John Skipper sent a memo to all of the company’s employees late Friday afternoon, outlining his wish that ESPN remain an apolitical organization, regardless of outside perception.http://nypost.com/2017/09/15/espn-prez-calls-for-employees-help-in-awkward-jemele-hill-memo/

“In light of recent events, we need to remind ourselves that we are a journalistic organization and that we should not do anything that undermines that position,” Skipper wrote in a memo obtained by Sports Illustrated. “We also know that ESPN is a special place and that our success is based on you and your colleagues’ work. Let’s not let the public narrative re-write who we are or what we stand for. Let’s not be divided in that pursuit. I will need your support if we are to succeed.”

In other words, batten down the hatches.

It’s hard to know what Skipper’s goal with such a memo would be, given the company’s spotty record of supporting its employees. For a president who is wishy-washy on the best of days in backing up his workers to the public to ask for support from those same workers is strange to say the least and almost certainly ill-advised.

But ESPN has been on its heels with this story from the beginning, ever since Hill posted her criticisms of Donald Trump to Twitter, including the suggestion the president is a “white supremacist.”

After initially indicating it would not discipline Hill, ESPN issued a half-hearted apology, generally mishandled the situation and endured anger from all sides, with some calling for Hill to be fired and others castigating ESPN’s higher-ups, including Skipper, for not standing more firmly behind Hill.

The memo does little to clear up the company’s position.

“ESPN is not a political organization. Where sports and politics intersect, no one is told what view they must express,” Skipper wrote. “At the same time, ESPN has values. We are committed to inclusion and an environment of tolerance where everyone in a diverse work force has the equal opportunity to succeed. We consider this human, not political.”

The Worldwide Leader has found itself constantly in damage-control mode, fighting off accusations of liberal bias as a result of multiple recent incidents, including Curt Schilling’s firing and a number of its on-air personalities – not just Hill – voicing their opinions on politics in general and the president in particular.

Skipper would like his employees and, more so, the public to believe what he writes at the opening of his memo: “I want to remind everyone about fundamental principles at ESPN. ESPN is about sports. … We show highlights and report scores and tell stories and break down plays.”

It is no surprise Skipper would have a somewhat romanticized view of his company’s mission, but just six paragraphs farther down, the real mission perhaps was made much clearer.

“We had a violation of [our] standards in recent days and our handling of this is a private matter,” Skipper wrote. “As always, in each circumstance we look to do what is best for our business.”

A few more circumstances like this and Skipper might not have much of a business to worry about. 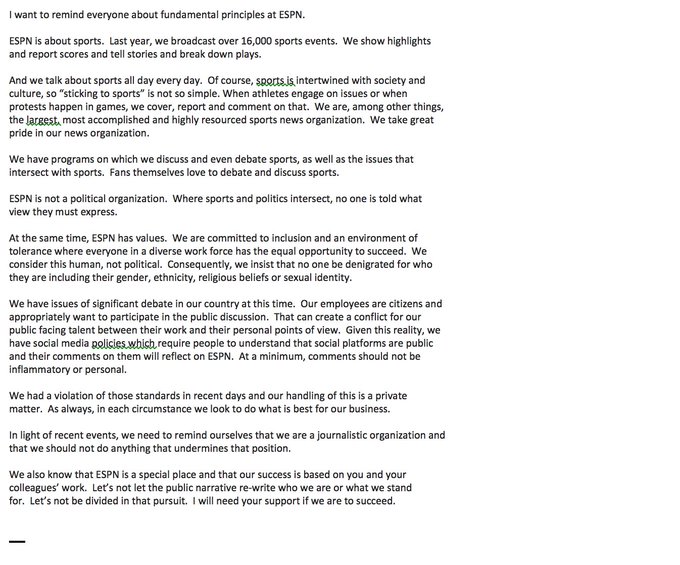