FILE PHOTO: Turkish forces and members of the Free Syrian Army are seen at the al Baza’a village on the outskirts of al-Bab town in Syria © Khalil Ashawi / Reuters
Ankara will respond decisively to any threats on its borders, Turkish President Recep Tayyip Erdogan declared at the end of G20 summit in Hamburg, warning against any push by the Kurds to secure their own independent region.
TrendsIraq carnage, Syria-Turkey, Turkey crackdown on Kurds

The Kurds have been the main fighting force battling jihadist on the ground in Iraq and Syria, playing an essential role in the US-led coalition’s campaign against Islamic State (IS, formerly ISIS/ISIL) terrorists in Mosul and Raqqa. 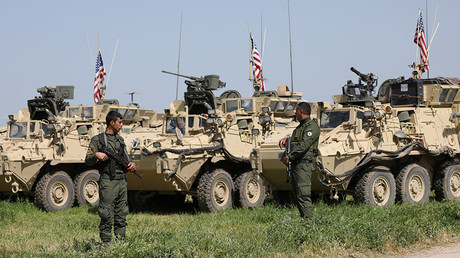 In May, the US Department of Defense confirmed the delivery of heavier weapons to US-allied Kurdish fighters which the US believes are needed to outmaneuver the Syrian government and retake the city of Raqqa from IS.

“We will definitely not remain silent and unresponsive to the support and arming of terror organizations next to our borders and the forming of terror havens in the region,” Erdogan warned Saturday at the conclusion of the G20 in Germany, Turkish Radio and Television Corporation quoted.

The Turkish government has urged the US to reverse its decision to broaden support for Syria’s Kurdish-led Syrian Democratic Forces (YPG), stating that it is unacceptable for a NATO ally to support“terrorist groups.”

Ankara perceives the YPG as terrorists allied with the Kurdistan Workers’ Party (PKK), a militant movement whichTurkey has been battling for three decades. And while Washington agrees with Ankara’s designation of the PKK as a terrorist organization, the US rejects the idea that Kurdish forces in Syria or Iraq should be equated with the PKK.