Why Are These Iranians ‘Really, Really Happy With Trump’?

TEHRAN — Mocking presidents of the Great Satan, the United States, has long been standard practice during state-backed rallies in Iran, where anti-Americanism is ingrained in state ideology.

For decades, Iranian revolutionary families would work late into the night to make sock puppets, cartoons and effigies of every American president since Jimmy Carter, then proudly parade them around during an anti-American protest and burn them in a bonfire.

Some would dress up with Uncle Sam top hats, Bill Clinton imitators would always have a big cigar hanging from his puppet mouth, and George W. Bush would be decorated with stars of David, to highlight the special relationship with Israel.

But as even the staunchest hard-liners would admit, the number of zealous protesters had dwindled over the years. In recent times, most people have been content just to pick up posters given to them by the authorities. Barack Obama’s outreach to Iran, brokering a nuclear agreement and giving up on regime change, was not good for the local sock puppet and effigy industry.

But in President Trump the United States has a new, colorful president who denounces Iran, and Iranian hard-line groups cannot believe their good luck. This Monday, at a cartoon and caricature contest where the only goal was to make fun of President Trump, the zealots were back in force. 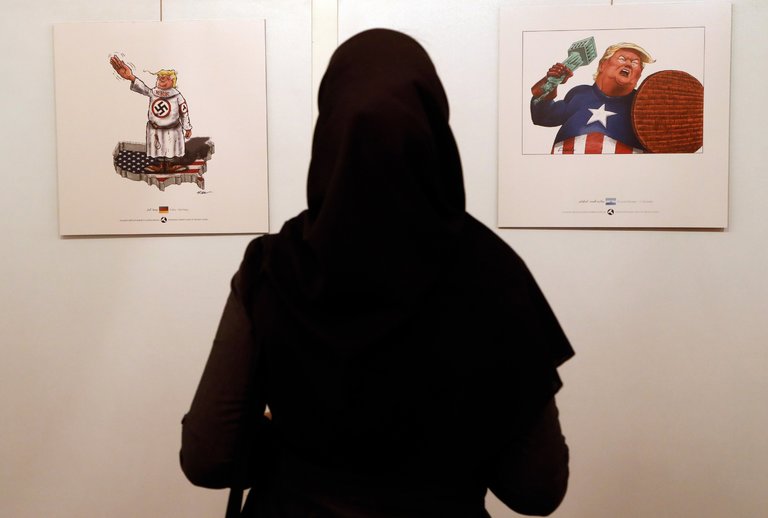 Several winners received cash prizes in dollars for showing the president in the white robes of the Ku Klux Klan, sharing a Time magazine cover with Adolf Hitler, or as Captain America wielding the Statue of Liberty as a bludgeon.

Some of the cartoons were also hung across Tehran. One poster, featured prominently at a busy intersection, showed Mr. Trump doing something to the rear of an elephant, symbol of the Republican Party, while also wearing a swastika armband and with the decapitated head of Lady Liberty at its feet.