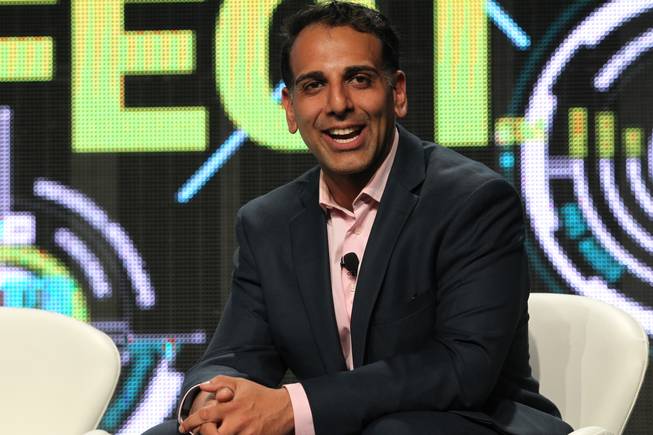 ESPN’s Adnan Virk moderated “Making It In the Major Leagues: How A Viral Video on Funny or Die Became the IFC Series ‘Brockmire’” at the NAB Show in Las Vegas.

Adnan Virk’s professional history places him in the middle of a Venn diagram of the Las Vegas sports scene in 2017.

As a host of “Baseball Tonight” on ESPN, Virk understands why MLB Commissioner Rob Manfred last month said Las Vegas could be a viable relocation market for the sport. Virk’s former roles as an NHL and NBA reporter in his native Canada give him astute insight into the potential for hockey and basketball to succeed in the desert as well.

After hosting a panel of the new IFC show “Brockmire” at the recent National Association of Broadcasters convention, Virk talked about how his first trip to Las Vegas years ago opened his eyes to the possibilities for professional sports in Southern Nevada.

What do you think of Las Vegas as a major league sports market?

It’s long overdue. I’ve only been to Vegas once before — I was with my wife a few years ago, we (also) went to the Grand Canyon — and I’m not a gambler. So when we were here, I saw that it’s not just about gambling. There’s so much to do here. The shows are spectacular, there’s lots of entertainment and being somebody who’s into that, that certainly feeds that vibe.

This notion of Vegas being this gambling hotbed and prostitution everywhere is completely outdated. People should realize that Las Vegas (was) the fastest-growing city in America. As soon as I got here, I was listening to the Fox (radio) affiliate, ESPN, CBS — there’s no question.

Being Canadian, my first question was, where’s the hockey team going to play? And somebody showed me. The NFL is obviously going to be close by there. It’s long overdue. They’re both going to be a success.

The key for hockey is this: It’s tough for expansion teams right out of the gate. San Jose was not a hotbed for hockey, but they gave it a few years and now San Jose is a really strong fan base, which you wouldn’t expect in Northern California. Vegas has the advantage of (the team) getting there before the NFL, so if they can get off to a good start — which can be tricky for expansion teams — and build that following early. I think the fans will be into it.

Football’s going to be No. 1 regardless, but hockey has a better chance than people may think because there are so many transplants who come to Las Vegas. So you’ll have a lot of hockey fans from Toronto, Buffalo, Chicago, Detroit — normal winter hotbeds.

Las Vegas might not be able to get an expansion franchise in the near term, but what are your thoughts on potential relocation and expansion in MLB?

Baseball is in a great place right now. I know the narrative sometimes can be, “Oh, it doesn’t have the same national reach and the overalls are down.” That is a concern, and the sport does need to market its stars better — you should know Mike Trout the way you know LeBron James.

(But) when I go to baseball stadiums, they’re packed. When I go to different markets, people are into it. When I just saw what the Cubs did in the World Series and the fact that that resonated with 40 million people — to me, that shows baseball is still a great game. It doesn’t mean that there aren’t challenges on the national level, but the sport is strong. It’s just a matter of pace of play, offense, getting young people involved — but the actual sport is still at a high level.

To your point about expansion, (MLB’s) problem is that there are a couple of sore spots and you need to fix those. Obviously Tampa is a concern. They’ve got to find a better place. The Trop is not a good stadium, and (Tampa) has not been a good fan base. I would posit pushing it back to Montreal. Being Canadian, I would love to see that. Anybody who knows the true story knows the reason that went downhill was because of the strike in ’94. That killed the sport in Montreal.

Now if they had a stadium, that’s the key. The Big O (Olympic Stadium) is a terrible place for baseball. If they could fix that, it would be better. Portland could be an option as well. So there are a couple of ones they need to fix. I don’t think they should expand. I would be more in favor of relocation.

Categories: The Muslim Times, US, USA