Why You Should Take Elon Musk’s 2018 Mars Shot Seriously 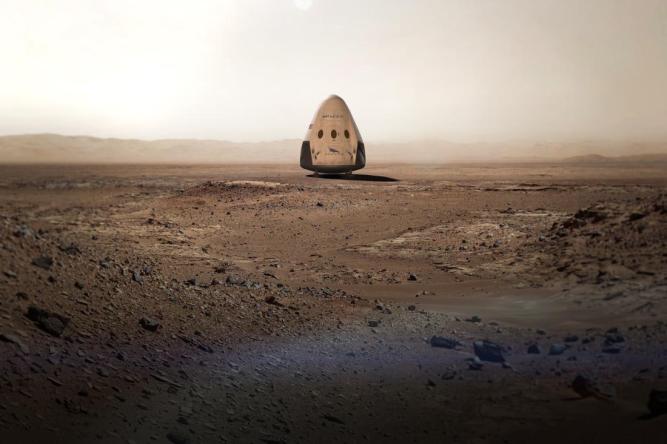 That’s the problem when a government agency is in charge of your space program. You can go only as far as the people in Congress and the person in the Oval Office let you go—which hasn’t been very far since the last Apollo astronaut left the moon.

For that reason and more, you should pay attention to the April 27 announcement from Elon Musk, the founder and CEO of SpaceX, that he intends to launch his first unmanned Mars mission in just two years and will beat NASA’s goal of putting astronauts on the surface in the 2030s by up to a decade.

Out of the gate, that was promising. A Dragon—specifically a Red Dragon—is just the kind of versatile ship you want for a Mars journey. The Dragon is the cargo vehicle that has made numerous uncrewed supply runs to the International Space Station, and will begin carrying astronauts as early as next year. Picture an Apollo spacecraft, but big enough to seat seven people instead of just three.

Red Dragon is an in-development variation that lands on legs, under the power of engines, rather in the ocean under a parachute. The engines, which have performed well in early tests, are liquid-fueled and throttleable, which means you can step on the gas or ease back as needed—the kind of flexibility required for a soft landing on Mars.

SpaceX has historically worked at a brisk clip and it’s not unrealistic to believe that the engines could be ready in time for a 2018 launch. That still leaves the landing legs to develop and test, but the company has already proven itself adept at that kind of technology, having twice used legs and foot pads to bring the first stage of its Falcon 9 rocket safely home after a launch.

The real challenge for SpaceX is less the spacecraft than the rocket that will be used to get it off the ground in the first place. The company uses a modular system for its boosters: The first Falcon rocket had a single engine. The Falcon 9, as its name suggests, uses nine of them, and is what the company has used for its space station missions. A deeper-space mission would require a bigger rocket—the so-called Falcon Heavy, which will use three clusters of the same nine rockets on its first stage.

That simple math means 27 engines—and 27 is an awful lot of ordnance to strap onto the bottom of a single booster. In one way it’s an improvement over the Apollo program’s Saturn V, which had just five far more powerful engines, since a flameout in even one of them would have been a mission-breaker. Lose one out of 27, however, and you can probably make it into space with barely a hitch in your step.