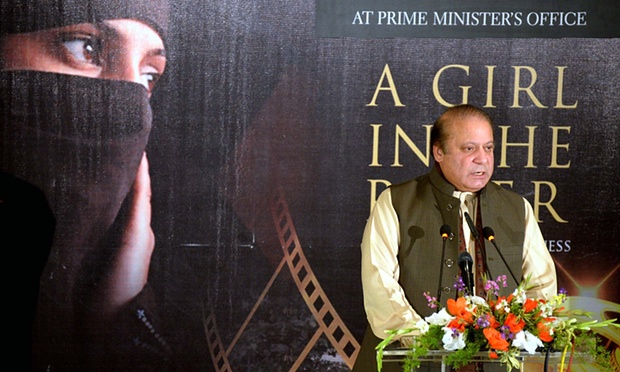 Laws that allow families to murder their daughters in the name of “honour” and avoid punishment will be changed as soon as possible, Pakistan’s prime minister has promised.

Nawaz Sharif said the perpetrators of so-called honour killings must not be allowed to be forgiven by family members, in a challenge to sharia laws that could trigger a confrontation with religious conservatives.

“This is totally against Islam and anyone who does this must be punished and punished very severely,” Sharif told the Guardian. “Changing the law is something that needs to be done at the earliest possibility.”

Sharif was speaking after the Pakistani premiere of an Oscar-nominated short documentary about “honour” killings attended by senior cabinet members and diplomats. Its director, Sharmeen Obaid-Chinoy, won Pakistan’s only Academy Award to date for Saving Face, her 2012 documentary about women disfigured by acid attacks.

She said toughening up existing laws would help change the climate in a country where the problem is widespread. “Before we can change mindsets we have to send the guilty to jail so people begin to understand that taking someone’s life is a big deal and merits a lengthy jail sentence,” she said.

According to the women’s campaign group the Aurat Foundation, about 1,000 Pakistani women are killed every year for “bringing shame” on their families. Some killings can be brazen, such as the 2014 killing of a woman by her familyoutside Lahore’s high court.

Although religious leaders condemn the killings, there is wide support for the tradition under Islamic law that allows murderers to avoid punishment if they are forgiven by the family of their victims, a practice that sometimes involves the payment of “blood money”.

Such payments are unnecessary when the killer is a brother, father or uncle – he can simply be forgiven by the rest of the family.

Obaid-Chinoy’s 40-minute documentary A Girl in the River tells the story of Saba Qaiser, an 18-year-old who survived being shot in the face by her father and uncle and dumped in a river.

The family said they had been humiliated and lost standing in the community after Qaiser married a man she fell in love with. They had wanted her to submit to an arranged wedding to a relative the family considered to have higher social status.

Although initially determined not to forgive her father, Qaiser ultimately pardoned him after coming under intense pressure from male community leaders in her home town of Gujranwala.

In an interview featured in the film, Qaiser’s father told Obaid-Chinoy his attempt to kill his daughter had earned him greater respect among his neighbours.

The decision by Sharif – a veteran conservative politician who tried to introduce strict sharia law in the late 1990s – to confront the religious establishment has surprised some observers.

Mufti Kifayatullah, a leader of the Jamiat Ulema-e-Islam, a religious party, accepted that some Islamic laws were being misused to protect killers. But he said any reform attempts would be resisted.