How can we be a true Muslim?

Now a days when media is aggressively discussing Islam and Muslims as a response to the recently attacked offices of a publication in France which killed 12 people.

The discussion was initiated by Mr Mashood who welcomed all the attendees and introduced the purpose of this kind of a meeting.

Attendees of the Seminar

Attendees of the Seminar

It was followed by speechs of Dr. Iftikhar (President of Ahmadiyya Muslim youth Association) and Imam Shamshad of Bait ul Jame’ Mosque who shed light on various aspects and angles of the life and teachings of Prophet Muhammad (peace be upon him).

Imam Shamshad Nasir explained how The Holy Prophet (peace and blessings of Allah be on him) was sent for all ages and all nations by God and for this He is facilitating ways and means through His grace. He said:
Prophet Muhammad (saw) came to connect human to his Creator.”

For example, according to a very popular hadith, a non-Muslim woman used to throw garbage on the Prophet Mohammad whenever he passed by her house. Neither he nor any of his companions took any action against her. One day, when she did not appear as usual to throw garbage at the Prophet, he went into her home and asked after her. And upon knowing that she was sick he gently asked if he could be of any help. She was astonished by his greatness and kindness and later was able to recognize the truth of the Man before him.

Throughout his life, the Prophet Mohammad was insulted by his enemies, but never did he order them killed to avenge every insult. Indeed, the Koran even tells of such instances and does not call for the death of those aggressors. Stories such as these, that emphasize the Prophet Muhammad’s compassion and mercy, are part of Muslim folklore, music, children’s stories and kitchen table conversations.

Imam shamshad advised the members that Prophet of Islam Mohammad (saw) exhibited patience and indeed supplicated for those who were persecuting him and never took revenge from any one at all, so we must follow his example in our lives if we want to become true Muslims. 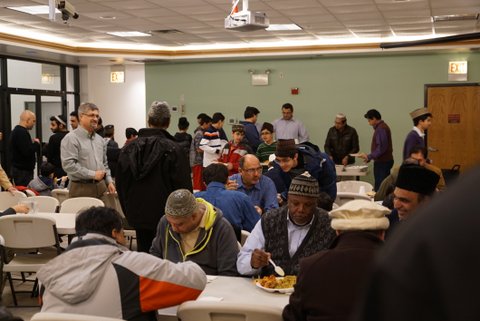 This discuss was then continued with an informal question and answer session followed by dinner and prayers in congregation.