Latino American, writer, innovator and self-identified indigenous Muslim, Mark Gonzalez, bases much of his work on the issue of identity. Gonzalez, who is of Mexican and French Canadian descent and was raised Catholic, began to explore Islam after practicing Christianity in a very deep way. He says, “In that process, I realized I didn’t like the idea of a gate keeper.” At that time he was also working on restorative justice with families who were deported after 9/11. He began building relationships with people practicing Islam and converted.

America has always been recognized for its diversity, and is seen as a country composed of minorities who intersect with one another on a regular basis.

As a result, the steadily growing number of Latino Muslims in the United States is inevitable. According to Reuters, 2.6 million people practice Islam, one of the fastest growing religions in our country, and Hispanics, another rapidly growing group, currently comprise 17 per cent of the total U.S. population. Of course these two populations would eventually begin to intersect, and what may at first feel like an uncommon link, seems almost natural. 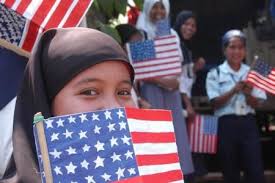