US military to keep ‘strong’ role in Mideast — Panetta

KUWAIT CITY — The US military will retain a “strong presence” in the Middle East despite a strategic shift to Asia, Defence Secretary Leon Panetta said Tuesday during a visit to Kuwait.

The United States plans to deploy a majority of its naval fleet to the Asia-Pacific along with other advanced weaponry but Panetta insisted that a robust American force would remain in place in the Middle East.

Panetta spoke to reporters aboard his plane travelling to Kuwait City on a two-day visit to discuss bolstering security ties amid tumult in the region and tensions with Iran.

“Let me assure you that the United States is strong enough that we can maintain a strong presence in the Middle East as well as in the Pacific,” he said.

He acknowledged that the United States had to be “flexible” in managing its forces in a more austere era and that it would have only one aircraft carrier in the Middle East for about two months to allow for maintenance work on another carrier, the USS Nimitz.

The American military still had nearly 50,000 troops and warships positioned across the region, he said.

“But in the end, I am very confident that we’re going to be able to maintain the ships and forces we need in order to respond to any contingency.”

The United States has deployed more ships and aircraft in the strategic Gulf over the past year after Iran threatened to close the strategic Strait of Hormuz if Western countries boycotted Iranian oil exports.

KUNA provided no details about the talks.

NOTE BY THE EDITOR: Can the Persian/Arab Gulf States (and Saudi Arabia) consider themselves independent when 50’000 US soldiers are stationed in their territory? 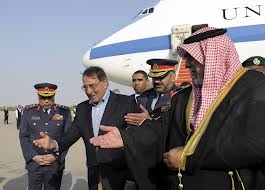