UK: MI6 told agent they could not kill al-Qaeda leader

MI6 passed up an opportunity to kill a senior leader of al-Qaeda because lawyers advised them they would be breaking the law, it can be disclosed. 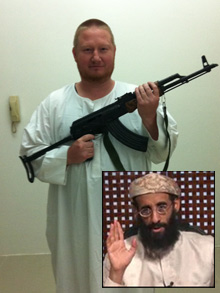 The agent who came up with the plan says that he was cut off by the British security services after he took the idea to the CIA. He was told that the British were no longer allowed to work with him because they were not allowed to get involved in assassinations. The terrorist Anwar al-Awlaki, who was later killed by the Americans, was pumping out propaganda calling for attacks on the West and actively recruiting young Muslims to launch such attacks. The revelations have been made by Morten Storm, the first British agent to go public since 9/11, who has spoken to the Daily Telegraph.

Storm, the former leader of a motorbike gang in Denmark, lived in Britain on and off for 15 years, first as an extremist using the name “Murad”, then as an agent using an outdoor pursuits company as cover.

His work helped foil three terrorist plots in Britain and Demark and led to the jailing of Hassan Tabbakh, a science graduate of Syrian origin who was making home-made bombs in Small Heath, Birmingham, it can be disclosed. Storm has provided documentation to the Danish newspaper Jyllands Posten which confirms he was recruited by the Danish security service, the PET.