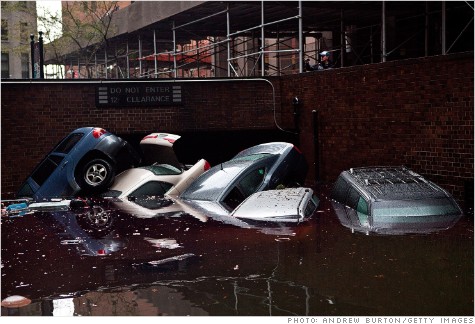 NEW YORK (CNNMoney) — The impact of Hurricane Sandy on the lives of residents of the Northeast will be great.

Millions are without power, likely for an extended period of time. Businesses — from the nation’s stock exchanges and all the way on down to thousands of corner stores — have been shut down.

The total cost of property damage and lost business is estimated to run between $10 billion to $20 billion, according to Eqecat, which provides loss estimates to the insurance industry.

Insured losses, excluding those covered by National Flood Insurance, are expected to be between $5 billion to $10 billion.

And total losses could go as high as $25 billion including interruption to business, according to estimates by Kinetic Analysis Corp.

But economists surveying the immediate aftermath of the storm say there may be little if any impact on the nation’s overall economy.  Read further.