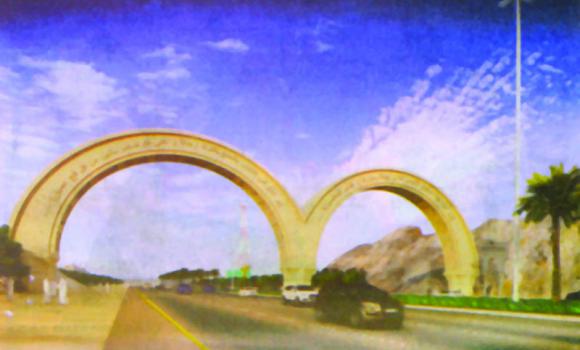 A model of the Shariah arch.

MAKKAH: A 23-meter high arch is currently being constructed along the Makkah-Jeddah Expressway to indicate the Haram boundary of Makkah, so that people will know the exact limits of the Haram area.

In statements published by business daily Al-Eqtisadiah yesterday, construction supervisor Muhammad Eid said the base of the Shariah arch had been completed, and work was now progressing on the three columns on which the arch would be built. “Work on the construction of the arch will be completed mid-October,” he added.

Eid said there would be two identical arches on both sides of the road going to and out of Makkah to show the exact boundaries of the Haram. He added that the whole area of the arch would be 70 meters. “The area of each of the two arches is 35 meters. Verses from the Holy Qur’an will be boldly written on the front and back of the arch,” he said.
Eid said the arch had been designed intricately and added that it would be erected when the three columns were constructed. “About 40 workers are doing the construction work, and the arch will be lighted green,” he added.

As Islam’s most sacred city, non-Muslims are not allowed to enter Makkah. The arch will indicate where the Haram area starts and where it ends, so that non-Muslims do not go beyond it. Currently the boundaries are indicated by billboards, flags and edifices that fade over time due to erosion and other climatic factors.

More than 50 years ago, a total of 934 flags indicating the boundaries of the Haram were erected on mountains and high places along various roads to Makkah from Jeddah, Laith, Taif and others. About 26 new flags were recently added, taking the total number of flags to 1,104.

Unlike the flags and the billboards, the arch would be seen from afar by anybody going to or out of Makkah.