The history of religious persecution: Commemorating martyrdom of 86 Ahmadis on May 28, 2010 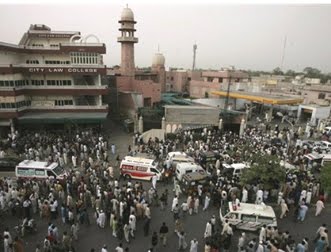 (From the archives: On May 28, 2010 in Lahore Pakistan two mosques of Ahmadiyya Muslim Jamaat were attacked by terrorists which resulted the death of 86 innocent worshippers who were gathered to perform their Friday Prayers. The following article was written after the attacks about the ‘history of religious persecution’, is reposted below for the readers.)

The history of persecution is as old as human life on this earth. The religious history is full of examples of force and violence used in the name of religion by people who had no religion. People were tortured because of their love for God by those who had not the faintest clue about God. Every prophet and messenger of God and their people suffered from persecution and violence. And their enemies always raised the voices against them.

God gives the example of the prophet Shuaib, peace be on him, when the persecutors told him: “Assuredly we will drive you out and the believers with you from our town or you shall have to return to our religion.” (7:89)

Shuaib’s reply to the threats typifies the attitude of all God’s prophets. He said: “Even though we be unwilling?” (7:89).

Is it possible to change hearts by force? Can a man be reconverted to a religion he has discarded after discovering the truth of a new religion?

No dictator has ever been able to escape this logic. The historical fact is that the sword has never ruled and will never rule men’s hearts. If the human body can be subdued by force, then the soul cannot. Belief is a thing of the heart.

The history of religious persecution, as told by the Quran, clearly shows that followers of true religion are the victims of violence. The Quran gives the examples of Noah, Abraham, Lot, Shuaib, Moses, Jesus and Muhammad, peace be on them all, who called the people to God by using love, sympathy and humility.

The Holy Quran narrates the story of the people of the cave, the Christians who were persecuted for 300 years. They used to be kept in the places for torture, the amphitheatres intended for gladiatorial combat with bulls and lions. It was in these places that naked Christians were thrown to hungry wild animals. The animals howled and made short shrift of the defenceless Christians. Sometimes these “apostates” were thrown to bulls which had been starved for several days. The starving creatures bellowed and snorted and, with hissing screeches, attacked. The Christians were gored or trampled to death.

The history of persecution repeated itself when early Muslims were laid out in the blazing sun. Burning stones were put on their chests; they were dragged through the streets of Mecca like dead animals. They were shunned and kept hungry and thirsty. They were thrown into dungeons, their belongings were seized and their families were broken up. Pregnant women were thrown off camels, their inevitable deaths the cause of merriment. Their dead bodies were cut asunder; the liver of the Prophet’s uncle was even eaten. They were pierced by arrows and cut down with swords.

The Prophet was stoned by ruffians and vagabonds and was chased and pelted by urchins till the cobblestones of Taif ran red with his blood. This bloodshed and persecution took place in the name of religion.

The painful history of persecution still continues today. In many countries, Ahmadiyya Muslim Jamaat, which is a peace-loving community that believes in love, peace, respect, harmony, tolerance and universal brotherhood, is suffering through violence and persecution. On May 28, in Lahore, Pakistan, two mosques of an Ahmadiyya community were attacked during Friday prayer. More than 95 innocent Ahmadis were killed and 125 were injured in these barbaric and inhuman attacks.

This persecution has been going on for a long time. Ahmadis are being persecuted in many countries; even certain governments and authorities are involved in this violence and persecution and laws have been made against Ahmadis.

In many cities of Pakistan, every day conferences are being held where speeches are made, banners are displayed, discussions are held and printed posters carry the message that Ahmadis “wajibul katl” – they should be killed. They should be taken out of Pakistan, given three days to repent and change their ways and faith or else put into a firing line. Posters in this sense have been printed and are on record.

All of this is happening under the eyes and nose of the authorities.

A glance at the history of religions would more than prove that true religion does not cause hatred, persecution, repression or the suppression of thought. It is their enemies who are persecuting and using violence against the followers of that true religion.

When will man understand and stop persecution and violence against others?