Israel among top 5 Countries with the Longest Life Expectancy

Life expectancy is perhaps the most important measure of health. It is readily comparable across countries and asks the most fundamental question concerning health: how long can the typical person expect to live? 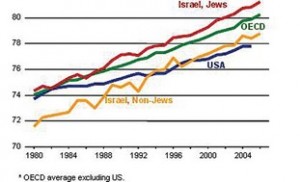 Life expectancy increases due to healthcare improvements like the introduction of vaccines, the development of drug cocktails to treat AIDS or positive behavior changes like the reduction in smoking or drinking rates. During the 20th century, the average lifespan in the United States increased by more than 30 years as the rates of infectious diseases declined.

Which OECD countries have the longest life expectancies? Japan’s life expectancy is nearly 83 years with European countries like Italy, Switzerland, Spain, Sweden, Israel and Australia only a year or two behind. Japan’s relative advantage is related to not only genetics but also its universal health care system, generally better diet and low levels of inequality.