China urges NATO not to provoke military tension in Asia-Pacific 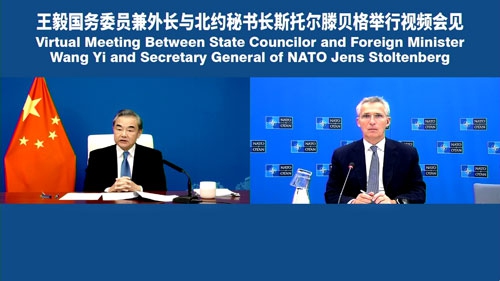 Wang said that some NATO member states in recent years have sent ships and planes to conduct activities around China, but the Asia-Pacific region does not need the establishment of a new military bloc, nor should the operations cause confrontation between major powers, or engage in small circles that aim to instigate a new Cold War.

NATO should adhere to its original geographical positioning and play a constructive role in the peaceful and stable development of the region, Wang noted.

Wang said China remains open to holding dialogues with NATO. In the face of global challenges, the international community needs unity, cooperation, understanding and mutual trust more than ever. The key to promoting ties is to better understand each other in a rational, objective way, not being derailed by misinformation or being deluded by lies and rumors.

China was not and will not be an adversary of NATO. China is willing to hold dialogue with NATO on the basis of equality and mutual respect, Wang said.