The end of the Gulf War on Feb. 28, 1991 saw the eviction of Iraq from Kuwait but paved the way for decades of conflict 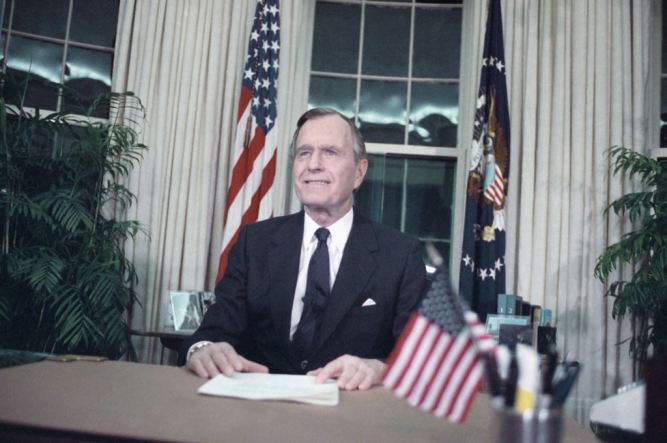 Almost no one saw the First Gulf War coming, but almost everyone with a television set saw it unfolding, bomb by bomb, shot by shot, night by night on the evening news.

This war, an epic clash of more than a million soldiers and thousands of aircraft, missiles, warships, tanks and artillery, had the grim distinction of being the first to be broadcast live around the world.

For Saudis, however, the war was not only fought on their TV screens but was also experienced firsthand. The Kingdom’s soldiers and airmen were on the front line, dozens of Scud missiles fell on Riyadh and other cities and, at one point, Iraqi troops invaded Saudi Arabian territory.

Perhaps most traumatic for Saudi Arabia and the other Gulf states threatened by Saddam Hussein’s Iraq was the sundering of the brotherly bonds that, until that moment, had meant that the prospect of one Arab state turning on another was unthinkable.

Perhaps most traumatic for Saudi Arabia and the other Gulf states threatened by Saddam Hussein’s Iraq was the sundering of the brotherly bonds that, until that moment, had meant that the prospect of one Arab state turning on another was unthinkable.

It began on Aug. 2, 1990, when Saddam invaded and occupied his small southern neighbor, Kuwait. It ended 30 years ago, on Feb. 28, 1991, after a 42-day aerial bombardment followed by a ground assault by a US-led coalition that lasted just 100 hours.

As wars go, it was a short one — Saddam’s aggression was met by an overwhelming display of force by a US-led coalition of nations, including the Gulf states, outraged by the dictator’s murderous adventurism.

It was certainly shorter than the Iraq-Iran War, a brutal eight-year conflict that finally came to an end on Aug. 20, 1988. By some estimates, as many as 500,000 on both sides had died in the fighting, and Iraq, formerly an oil-rich country, had been transformed into a nation on its financial knees.

In 1988, not for a moment did any rational observer foresee what came next. Another war would surely be the very last thing that Saddam would contemplate after the carnage of the past eight years, and yet he invaded his small southern neighbor, Kuwait, triggering the First Gulf War and the calamitous chain of events that would follow it.

Having failed in his declared ambition to annex Iran’s oil-rich Khuzestan Province, the dictator now intended to make Kuwait the 19th province of Iraq.

It was not the first time in living memory that an Iraqi leader had tried to annex the small country. In 1961, one week after Kuwait gained its independence after 62 years as a British protectorate, Iraq’s President Abd Al-Karim Qasim, who had overthrown the Iraqi monarchy in 1958, threatened to invade. Qasim argued that as Kuwait had been part of the Ottoman vilayet of Basra, which was now in modern-day Iraq, Kuwait was “an integral part” of Iraq. He was dissuaded only when Britain rapidly dispatched 3,000 troops to protect it.

But Saddam’s motivation for launching such a risky land grab was rooted less in historical precedent than in bitterness, desperation and self-delusion. Humiliated in the eyes of many Iraqis by his failure to defeat Iran, and with the impoverished Iraqi state unable to contemplate flooding an already near-non-existent job market with hundreds of thousands of demobilized soldiers, Saddam sought to shift the blame for his country’s precarious condition onto the Arab nations that had supported Iraq during its war with Iran — Kuwait and Saudi Arabia.

Even in the face of such an extraordinary betrayal, the Gulf states worked to find a peaceful solution to the crisis, but Saddam was hellbent on bloodletting. It was an outrageous gambit, certain to fail, and fail it did. But the end of the First Gulf War was just the beginning of decades of catastrophe — for Iraq and the entire region.

Precursors to war
A fuel-oil fire in a Baghdad power plant hit by the Iranians in October 1980 during the Iraq-Iran War. It was pressure created by Iraq’s war debts that prompted Saddam Hussein to invade Kuwait. (Getty Images)

When Saddam Hussein seized power in 1979, Iraq was debt-free, sitting on foreign-exchange reserves of $35 billion and enjoying oil revenues that in 1980 alone earned the country $26 billion.

That all changed on Sept. 22, 1980, when the dictator invaded Iran, triggering eight years of war that devastated the Iraqi economy.

Iraqi soldiers clash with Iranian troops along the Iran-Iraq border in July 1984, midway through the eight-year war between the two countries. (Getty Images)

As the fighting dragged on, oil revenues dried up and Iraq burned through its reserves. Shunned by international lenders, Saddam went cap in hand for loans to sympathetic Gulf states. By the end of the war, Iraq was in debt to its neighbors to the tune of $40 billion.

Before the war with Iran, among the OPEC states the scale of Iraq’s oil exports had been second only to Saudi Arabia’s. In 1979, Iraq exported 3.3 million barrels per day, accounting for 11.4 percent of OPEC’s total exports and earning the country $21.4 billion.

By 1983, however, barely three years into the war, its oil exports had fallen to 0.74 million barrels per day, producing revenue of only $7 billion.

“Ironically, as the war continued to be fought on Iraqi soil and oil revenue continued to decline, Iraq’s dependence on this source of income intensified since this dwindling income had to pay for essential military and non-military imports, to service foreign debt, and to serve as the basis for fresh borrowing,” wrote the renowned Iraq-born economist Abbas Al-Nasrawi in his 1994 book “The Economy of Iraq: Oil, Wars, Destruction of Development and Prospects, 1950-2010.”

“An important consequence of this changing picture of Iraqi oil was the increasing dependence of the Iraqi regime on the financial support its neighbors, especially Saudi Arabia and Kuwait, were willing to provide.”

Kuwait and Saudi Arabia agreed to produce and sell some 0.3 million barrels per day of their own oil on behalf of Iraq, while the Kingdom took steps to shore up Iraq’s creditworthiness in the international financial markets and allowed Iraq to build pipelines across Saudi territory.

Crucially, Kuwait and Saudi Arabia also agreed to a series of loans — generosity that helped to keep Iraq afloat during the war but that would ultimately backfire. Saddam turned on the two countries to which he owed his very survival, demanding that the Gulf states write off the loans that, he insisted, should be regarded as gifts from countries grateful for Iraq’s stand against Iranian expansionism.

Iraq’s penury, he added, was to be blamed not on the war but on the “glut in the oil market” created by Kuwait’s increase in oil production during the crisis, which had suppressed oil prices and prevented the recovery of Iraq’s economy.

Throughout 1990, Iraq put continuous pressure on OPEC to limit output. The simmering row boiled over on July 17, when Saddam openly threatened to take military action against Kuwait and the UAE — a threat reinforced when he massed 100,000 troops on the Kuwaiti border.

By July 25, however, a compromise was reached with OPEC that seemed to defuse the crisis. The decision by Kuwait and the UAE to reduce oil production, pushing up global prices, made front-page news around the world.

At noon that day in Baghdad, April Glaspie, the US ambassador to Iraq, was summoned by Saddam. It was, as Glaspie’s cable to Washington noted, the first time he had ever called in a US ambassador, and her report of the meeting offered a fascinating insight into the Iraqi president’s frame of mind.

Throughout the two-hour meeting, his manner was “cordial, reasonable and even warm,” but he quickly began to list his grievances, against the US, Kuwait and the UAE. Iraq, he conceded, was in serious financial difficulties. After its “victory” over Iran, which he said had “made a historic difference to the Arab world and the West,” Iraq deserved “a Marshall Plan” — a reference to the US aid program in Western Europe following the Second World War.

Instead, complained Saddam, “you want the oil price down,” and “some circles” in the US government were even gathering information on who might be his successor. The US, he said, was also encouraging “those who are damaging Iraq” — a reference to the UAE and Kuwait.

“At this point,” Glaspie reported, “Saddam spoke at length about [the] pride of Iraqis, who believe in ‘liberty or death’.” Although Iraq “knows the US government can send planes and rockets and hurt Iraq deeply,” he “asks that the US not force Iraq to the point of humiliation at which logic must be disregarded.”

The ambassador asked Saddam why he had positioned so many units of the Republican Guard on the border with Kuwait. Saddam replied, “How can we make them (Kuwait and the UAE) understand how deeply we are suffering?”

The main US takeaway from the meeting was that “Iraq wants friendship.”

The following day, The New York Times reported that “the Iraqis’ apparent success at the meeting of OPEC nations that began today came as tension in the Persian Gulf region seemed to diminish considerably, largely because of fast-paced shuttle peace talks among Iraq, Kuwait and Saudi Arabia undertaken by Egypt’s President Hosni Mubarak.