With Swiss voters set to decide on a contentious “burka ban” on March 7, Anila Noor and Maria Khoshy explain why they – as Muslim feminists and refugees – oppose the idea. 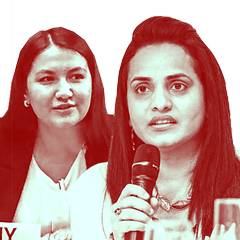 We are feminists, women’s rights activists, and leaders in our communities. We are also Muslims. One of us is a recent refugee from Pakistan to the Netherlands. The other fled to Switzerland from Afghanistan when she was thirteen years old.

In our countries of origin, our governments mandated what we wore in an effort to restrict our basic human rights. We do not want the same to happen in Switzerland, a democratic nation which prides itself on its respect for human rights and the rule of law. It is time that the government and people in power stop telling us how to dress.

Burka ban vote appeals to Islamophobia and feminists
This content was published on Feb 16, 2021Feb 16, 2021 More than ten years after a ballot on banning minarets Swiss voters have the final say on a proposal to outlaw face covering in public.

Oppression in our home countries

“Keep your duppata (headscarf) on your head properly, wear your hijab!” These are words I grew up with in Pakistan. Conservative groups often invoke a famous saying to impose the hijab or burka: the proper place of a woman is in her “chadar aur char diwari” – meaning veiled and within the four walls of her home. In Afghanistan as well as in Pakistan, many women have been killed in the name of “honour” or in retaliation for asserting our basic women’s rights as human rights.

An oppressive initiative in Switzerland

We left our homes to flee oppression, including gender-based persecution. So, it is deeply ironic that we find ourselves now fighting against violations of our human rights in our place of refuge. In Pakistan and Afghanistan, and now in Switzerland, the government is under pressure from conservative forces to restrict women’s basic autonomy and freedom of dress.

That Switzerland would consider joining other European countries in banning forms of dress is particularly ironic given its strong commitment to neutrality and the freedom of religion. It is also ironic given that only a few dozen women in a country of almost nine million people wear the burka.

It is hurtful to us that people claim that the initiative protects women’s rights without bothering to ask the women most directly affected by the ban – Muslim migrants to Switzerland, visitors and tourists from certain Middle East countries, and Muslim feminists and advocates for gender equality. New Women Connectors brings together refugee women across Europe, many of whom fled repressive regimes in the Middle East or war-torn Syria. Some of the Muslim women in our group wear the hijab; others do not. It does not matter, as it is their choice. As Muslims in Europe, we do not tend to wear bikinis to the beach. We do not tattoo our arms or faces. However, we do not object to other people’s freedom to do so.

Jean-Luc Addor
‘The burka initiative defends the dignity of women’

This content was published on Feb 4, 2021Feb 4, 2021 The initiative to ban hiding one’s face in public allows for ‘adequate exceptions’, says Jean-Luc Addor from the Swiss People’s Party.

If a woman who prefers the full burka were to join our group, we would welcome her with open arms. We personally do not wear burkas or niqabs, but as feminists, we are not threatened or bothered by those who do. More fundamentally, we are deeply concerned about what will happen to the small number of women in Switzerland who do wear the burka or niqab. Will the threat of fines force them to stay indoors, and what impact will this have on their mental health and the mental health of their children?

The real barriers to gender equality in Europe

During the Covid-19 crisis, we asked ourselves why women’s clothing has garnered so much attention when there are so many more pressing issues facing refugee women in Europe, including Switzerland. The pandemic has had a devastating economic toll on many sectors of society, but women have been the hardest hit.

As community leaders and organisers, we know the systematic barriers to equality and inclusion faced by refugee women in Switzerland: labour market restrictions, employment discrimination, and even access to opportunities. We face lack of respect or recognition for our educational accomplishments or professional skills, simply because we built our careers in developing nations. We face social ostracisation.

We face limitations on our ability to access education, to get loans to start businesses, and to find affordable childcare for our children so that we can work. We face accusations that we are not “willing to learn the local language” when in fact we work very hard at it, and we have already demonstrated our ability to master several other languages. We often face domestic violence at home and threatening or insulting behaviour on the street. We face stereotypes in the news media that portray us as passive victims of oppression rather than as the courageous human rights defenders that we are. We face the accusation that our values are somehow at odds with those of Europe, when we are the ones who fled our homes to have a shot at justice and freedom here in Europe. We fight for “European values” like freedom of religion, autonomy, and gender equality even more fiercely than do many Europeans, if only because we know what it is like to grow up under oppressive regimes.

‘The burka initiative only serves to throw fuel on the fire’
This content was published on Feb 4, 2021Feb 4, 2021 A ban on the burka and the niqab in Switzerland would be counterproductive, says Greta Gysin from the Green Party.

It is hurtful to want to belong and yet to be perennially treated as the “other” – blamed for our own “integration failuresExternal link” – when we, just like European women, are working so very hard. Hateful initiatives like the burka and niqab ban are just one more reminder that no matter how hard we try, we will never fully belong; we can never really become Swiss.

By advocating for the right of refugee and migrant women to have “a seat at the table,” we also seek to advance gender equality for our European-born colleagues. Institutional and structural barriers to gender equality – like labour market discrimination, domestic violence, and lack of affordable childcare – affect Swiss-born women too. Switzerland ranks 26th of 29 in the Economist’s glass ceiling index: these issues affect native Swiss women as well as migrants. Our interests are not opposed to those of Swiss women: we are on the same side.

Anila NoorExternal link, a human rights activist, TEDx SpeakerExternal link and refugee to the Netherlands from Pakistan, is an expert in gender and migration issues, part of the European Commission’s Expert GroupExternal link on views of Migrants, and the co-founder of GIRWLExternal link and managing director of New Women ConnectorsExternal link. @nooranila

Maria Khoshy is a commercial studies student and a refugee representative and activist in Switzerland. @mariakhoshy