Breakfast of champions: How Turks start their day 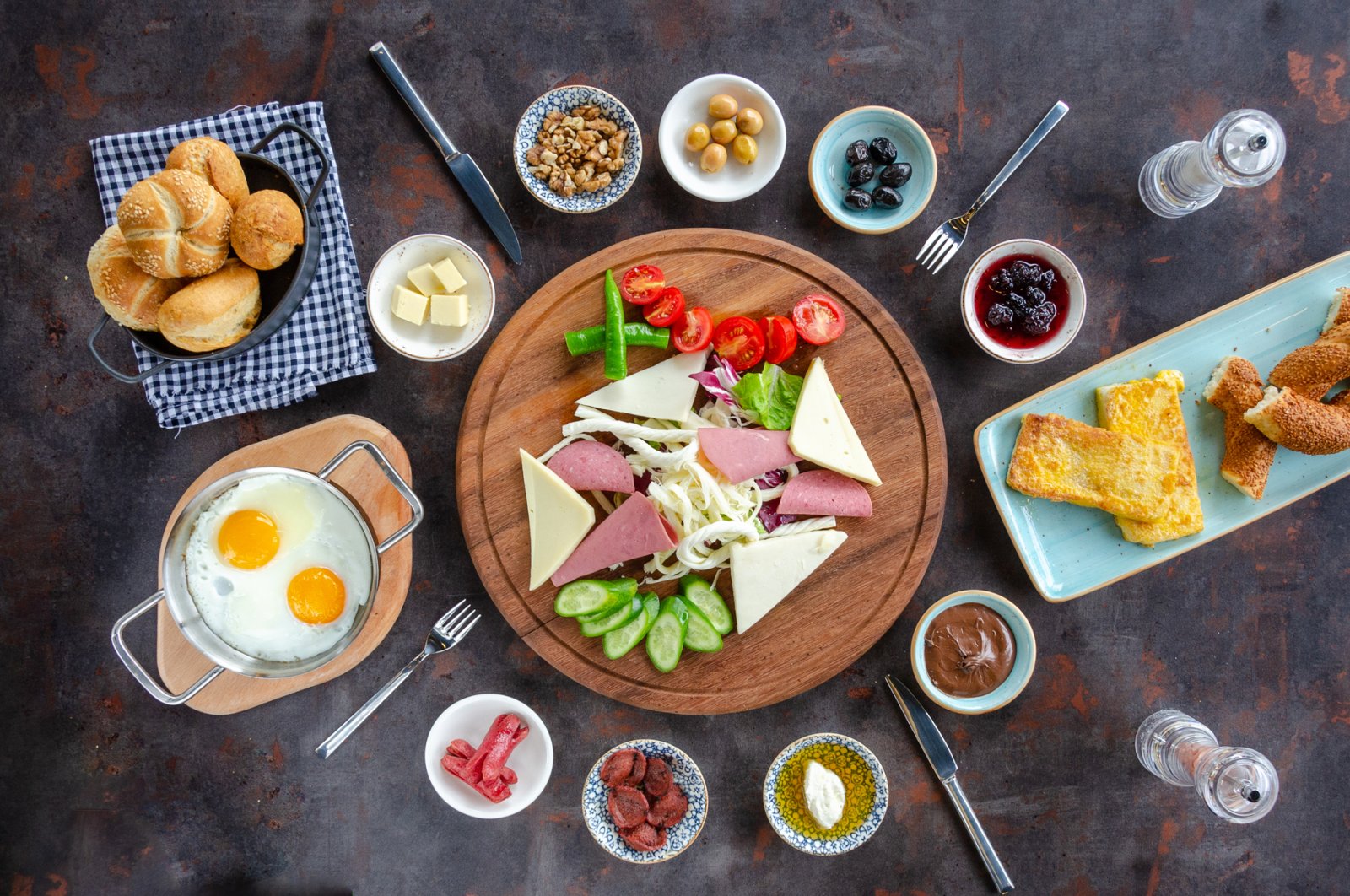 A Turkish breakfast has many elements, including but not limited to eggs, olives, honey, butter, cheese and bread. (iStock Photo)

On a flight to Turkey once, I was seated next to a member of the United States military who couldn’t stop raving about the immense benefits of the breakfast served in Turkey. He couldn’t believe that tomatoes, cucumbers and olives could be combined with butter, honey, tahini and cheese all in one meal and on the same plate, no less. He went on and on telling me about each of the different nutrients and their benefits in every category of breakfast item that composed the Turkish breakfast. Not only does the traditional Turkish breakfast spread combine raw produce, but there are also healthy fats such as olives as well as a variety of dairy products, including butter and a selection of cheeses, and protein in the form of charcuterie meats and sesame tahini. Sugar and fruit come in the form of jams and are accompanied by nutrient-filled honey, and for carbs, a basket of bread is a staple in order to soak up all of the delicious goodness. This military man raved that the Turkish breakfast was the most balanced and beneficial version in existence and emphasized that he strongly wanted to propose that the entire U.S. Army adopt the same morning meal.

The essentials of the typical basic Turkish breakfast are bread, a variety of cheeses generally including feta and kasseri, green and black olives, sliced tomatoes and cucumbers, butter, honey and jam. The extras that you would expect at lavish breakfast tables, upscale restaurants and chic hotels would be kaymak – Turkey’s version of clotted cream, with the most preferred variety being produced from buffalo milk – sesame tahini paste and pekmez, which is a thick molasses generally made from grapes, acuka – a mix of tomato or red pepper paste, garlic and walnuts – charcuterie meats such as salami and ham, and eggs, offered either hard-boiled, fried or in omelet format, with melted cheese if you please. Sometimes the table is adorned with pastries such as “poğaça” stuffed with cheese or olives, baked tray börek filled with fresh herbs, and crispy cheese-stuffed fried “sigara börek.” But the beloved bread basket is certainly the star of the show, and the general rule is the more upscale place you dine, the more elaborate the selection of baked goods. So, while slices of Turkey’s basic white bread loaf are inevitable, sometimes there are slices of wheat bread and simit, or if you are lucky pişi, which are pocket-sized pillows of fried dough.

The Turkish breakfast is basically available in three formats: Most hotels will offer the meal buffet-style, while restaurants tend to dish up per-person breakfast plates, and then there is the ultimate, which is referred to as “serpme” and is a breakfast spread for the table in which each breakfast item is placed on its own small plate for the entire table to share. Meanwhile, the beloved and aromatic Turkish sausage, called “sucuk,” is also sliced, grilled and served in a copper pan, and the same can be said for fried “hellim” (halloumi) cheese. However, in most cases, these are delicacies ordered additionally.

There are a number of delectable combinations beloved by the Turks combining sweet and savory in an unexpected way. For example, the Turks love to spread butter or clotted cream with honey and sesame tahini with “pekmez” (molasses). There may also be slices of watermelon on your breakfast plate, which Turks love to eat accompanied by feta cheese.

One of the most exciting aspects of traveling through Turkey is getting the opportunity to try the different regional breakfast specialties of which, unsurprisingly, there are many. In Izmir for example, there is the “boyoz,” which is a round, rich and flaky pastry similar yet slightly heavier than the French croissant. In the popular vacation destination Alaçatı, “lor” curd cheese is served doused in black mulberry jam. Meanwhile, in Antalya, there is the “Alanya bohçası,” which is a crepe bundle filled with cheese.

In Bursa, a breakfast tradition is to have a pide baked with tahini and sugar, which is aptly referred to as “tahınli pide” while in Istanbul’s neighboring Kirklareli “soğan pidesi” is their specialty, which more resembles a börek and is a baked pastry stuffed with savory onions and tomatoes. In Edirne, “pekmezli kaçamak” is a unique, almost grits-like dish consisting of cornmeal doused in pekmez. However, the most popular utilization of cornmeal in the country definitely comes from Rize and the greater Black Sea region by the name of either “mıhlama” or “kuymak” and consists of cornmeal and cheese cooked to a fondue-like consistency.

The central Anatolian province of Kayseri is not only famous for its pastırma, but also for the fenugreek that lines it, giving it an irresistible smoky flavor. For breakfast, fenugreek powder is mixed with tomato and red pepper paste to create “çemen,” which is the Turkish word for both fenugreek and this dip sauce of sorts consumed at breakfast. In Adana and Mersin, “peynirli sıkma” is a popular breakfast item. It is similar to Mexico’s quesadilla and is a thin, tortilla-like flatbread wrapped up with a stuffing consisting of lor curd cheese, onions and parsley. In Şanlıurfa, a fried, crescent-shaped stuffed pastry resembling an empanada and referred to as “semsek” is the specialty, either filled with cheese or minced meat and onions. Similarly, Eskişehir’s specialty for both breakfast and any time of day is “çiğ börek,” which is also a crescent-shaped, stuffed fried pastry that is simply larger in size.

In Hatay, a popular pide referred to as “biberli ekmek,” which translates to “bread with pepper” comes in the form of a small, soft, round flatbread covered in a spicy mixture of pepper paste and lor cheese, spiced with onions, cumin, thyme, nigella and sesame seeds. In Gaziantep, which by many is considered to be the country’s culinary capital, “zeytin börek” is the breakfast specialty and consists of a thin, long pastry resembling a calzone that is filled with a stuffing made from green olives mixed with tomato paste, onions and parsley and, on occasion, minced meat.

Hands-down the most popular breakfast in Turkey is the Van breakfast, which is a vast spread of unique flavors from the region including “murtuğa,” which is a form of scrambled eggs cooked with flour in butter and of course “otlu peynir,” which is an aromatic feta-like cheese made with wild garlic and up to 25 different herbs