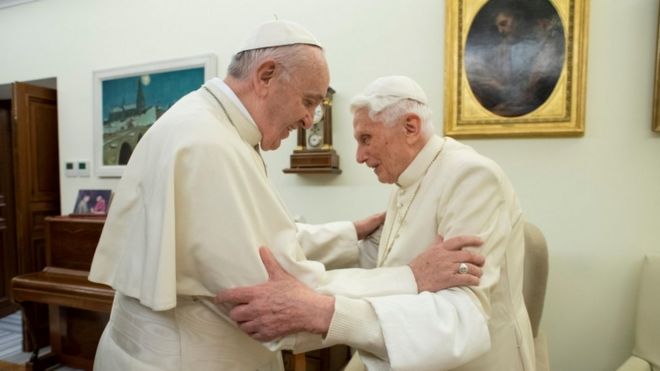 Retired Pope Benedict XVI has issued a defence of priestly celibacy in the Catholic Church as his successor considers easing a ban on married men serving as priests.

Pope Benedict made the appeal in a book co-authored with Cardinal Robert Sarah.

It comes in response to a proposal to allow married men to be ordained as priests in the Amazon region.

Pope Benedict, who retired in 2013, said he could not remain silent on the issue.

In the book, Pope Benedict says celibacy, a centuries-old tradition within the Church, has “great significance” because it allows priests to focus on their duties.

The 92-year-old says “it doesn’t seem possible to realise both vocations [priesthood and marriage] simultaneously”.

It is rare for Pope Benedict, who was the first pontiff to resign in almost 600 years, to intervene in clerical matters.