On 26.11.2019 three hours 53 minutes of early morning passed as usual. However at 03.54 an earthquake of 6.4 magnitude shook the second largest city Dorres of Albania. It has over 113 thousand population. Until latest news 49 died and hundreds injured.  Search for buried and missing still continue and casualty total likely to further increase. Nearby villages with in radius of 25 km of Dorres were also badly affected. Ishem village in the area with approximately 2000 population was visited first by the HF volunteers.

From day One Humanity first volunteers from Albania and Kosovo became active under the dynamic guidance of Mr Bujar Ramaj who is currently acting Sadr AMJ and in charge of HF Albania. Sadar AMJ Kosova Mr Jinah also dashed to Albania with his team and started helping the earthquake victims. Doors of AMJ  Albania center were opened to earthquake victims and from first day 38 children, men and women are accommodated in the center building and provided accommodation, regular daily meals and other facilities.  All this likely to continue as long need exists. 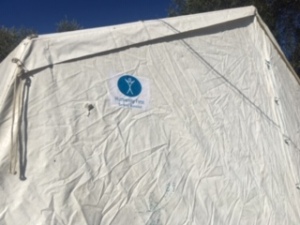 In view of limited resources available at the disposal of Humanity First Germany, it was opined just to restrict  relief efforts to affected residents of village Ishem. Immediately 10 tents  with size 6 X 4 meters were rented and erected. Out of 10 half number were erected at places near the houses of affected people while remaining 5 at central place for collective use by the villagers. Each tent was also equipped with mattresses.  Food supplies also made available to needy.

Visit of Ishem village is undertaken on daily basis by HF Volunteers. Slowly and gradually people are now coming out of initial shocks. Latest survey revealed villagers due to their culture and traditions do not want to leave their damaged houses. They wish to have suitable tents in their courtyard where they can spend night as structure of houses are damaged and after shocks are still felt. And prevail the fear of collapse these damaged houses. Currently no suitable tents are available in Albania and HF is making an effort to procure suitable tents from Germany or elsewhere. Additionally villagers have also requested assistance in restoration of their damaged or destroyed houses.  National Head of AMJ Germany made a phone and promised to extend help to earthquake victims after having sought approval from higher authorities in the hierarchy.

Inner view of the rented Tent provided by HF