Bosnia is close to the edge. We need Europe’s help

With the economy hobbled and ethnic nationalist sentiment rising, this is no time for complacency 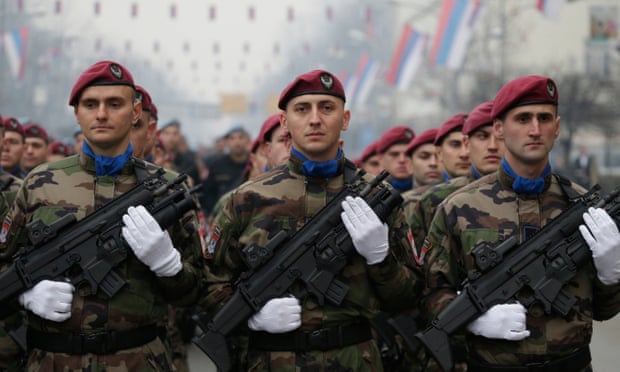 In the opening scenes of Danis Tanović’s Oscar-winning film No Man’s Land, set in Bosnia during the 1992-95 war, a soldier in the Bosnian army reads the newspaper in a trench. Worriedly, he exclaims: “Look at this shit in Rwanda.”
This scene, said to be based on a true anecdote, turned out to be a litmus test for viewers.

Whether you laughed or not, you could read it in two ways. First, as a testament to the ability of Bosnians to empathise with the misfortune of others, even amid their own dire circumstances. The second reading is less flattering: might the unnamed soldier be so insensible to his own desperate situation, the death and destruction that defined the early days of Bosnia’s independence that the Rwandan genocide loomed larger in his mind?
This is Europe: stay close with the Guardian’s email updates
Read more

In 1992 in Sarajevo, I celebrated my eighth birthday, just weeks before it all began. My parents threw a party for me, oblivious to the fact that in eastern Bosnia and the Drina valley – the natural border between the socialist republics of Bosnia and Serbia – Bosnian Muslims, or Bosniaks, were already being “ethnically cleansed” by Serb nationalist forces.
Earlier that winter, not even the horrors of the siege of Vukovar in neighbouring Croatia had prevented Sarajevan families from taking their children skiing. “It can’t happen here, it can’t happen to us,” became an everyday mantra. I remember how, at my birthday party, one of my friends’ fathers, a Yugoslav People’s Army colonel, took my parents aside and told them about the imminent danger. My parents politely listened to his words of warning. Later that night, they laughed them off as the ramblings of a lunatic. “War is impossible here,” they thought, confident in the fact that Bosnia’s characteristic pluralism would be our saving grace. Besides, we lived on Brotherhood and Unity Street.

They were obviously wrong. Our two-week trip to visit my mother’s brother “until things quietened down” turned into a four-year odyssey in search of refuge, while my father stayed at home. In the meantime, our Sarajevo was besieged incessantly and indiscriminately shelled. Bosnian Serb snipers did not differentiate between military targets and children playing in the streets. Further south, the city of Mostar would find itself similarly encircled. Banja Luka, the country’s second largest city, was systematically cleansed of non-Serbs and all its mosques demolished, including the Ferhadija, a Unesco world heritage site. The country witnessed torture camps, the use of rape as a weapon of war, the summary executions of prisoners including children, an orgy of violence that culminated in the genocide in Srebrenica, where thousands were murdered in just 10 days. And the message from the world seemed to be that we were to be all alone in this – brotherhood, unity and life itself be damned.

My family was reunited in 1996. Our apartment had been destroyed, and my father had barely escaped death after shrapnel from a shell tore through his abdomen at the very end of the war, pockmarking his body with miniature metallic reminders of that day. Together with many others, he became a statistic. According to estimates, between 400,000 and 1.7 million Bosnians suffer PTSD. If they were lucky enough to survive, that is.

One of the most vivid memories I have of our return was seeing the city’s cemetery for the first time after almost four years. A sea of marble pillars spread across the neighbouring hills, each a monument to someone’s tragedy. With 130,000 dead and 2.2 million refugees and internally displaced people, no one was left untouched by the conflict. But people focused on rebuilding – their homes, their lives, the country. Flowerpots could be seen on every balcony and windowsill in those early days. Bosnia was represented at the Olympics and participated in the Eurovision song contest.

Yet in a country where peace was brokered solely to prevent further horrors and where the war had no clear winner, there was no happy ending. A cumbersome state apparatus with 14 levels of government and no clear reconciliation strategy opened the door to continued ethno-nationalist brinkmanship and endemic corruption. Privatisation of state-owned companies was marred by nepotism, clientelism and gross misconduct. Youth unemployment has surged over the last five years, peaking at 57.5%.

Almost 25 years after the end of the war, Bosnian citizens are trapped in a hand-to-mouth existence, with some 23% estimated to be living at or below the absolute poverty line. This has led to a new mass exodus. In 2016 alone, one assessment by the ministry of foreign trade and economic relations stated that 80,000 had gained permits to work in EU countries. Currently, hundreds of thousands of people are leaving Bosnia each year. And they won’t be looking back. Toxic nationalism is ever present. Secessionist rhetoric is again spreading from the Bosnian Serb-majority entity of Republika Srpska (RS), whose leader increasingly insists that Bosnia’s dissolution is inevitable.