A day prior to Eid ul Fitr, with the generosity of Humanity First Germany, the children without parents stranded in Refugee camp Sofia Bulgaria felt very happy to have been given Id gift packets by Humanity First. Local head of Humanity First, Mr Jawwad- Uffan along with his bother Mr Zia, his mother and wife plus Mr Abdullah were the main motive force behind this humanitarian project. Refugee camp director as well social workers involved in taking care of these parent less young welcomed the Humanity First team with open heart and mind. Extended all the facilities to distribute the Eid Packets amongst the refugees mainly the young without parents as well few families with small children.

Getting Ready for the distribution of packets 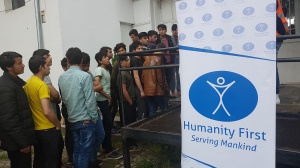 Young without parents lining up to get gift packets

After having received the gifts at this special occasion of Eid one could see the pleasure and happiness in the eyes of every one. All recipients whose number was almost 100 thanked Humanity First for this kind gesture and applauded this humanitarian act.

Here it goes the distribution of gift packets