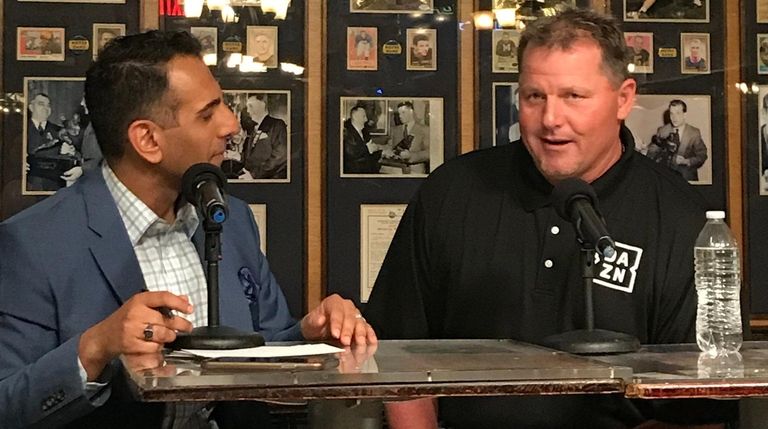 The show is called “ChangeUp,” which certainly describes Adnan Virk’s sudden career turn, but it happened so quickly it was more of a fastball.

After nine years as a rising star at ESPN, Virk was fired on Feb. 1. On Thursday night, he will resurface on the streaming sports service DAZN when it premieres its nightly baseball program with Virk as lead host.

“I’ve had so many people say to me, you don’t ask why adversity strikes, you only look for the opportunity,” he said Tuesday at an event in Manhattan to promote the show and introduce the cast. “I know it’s a cliché, but ignore the setback and focus on the comeback.

“If somebody had said to me, from the bottom of my heart, ‘Hey, would you like to do a nightly baseball show where you watch every game all the time?’ If you’re a lifelong baseball fan, that’s an absolute dream. Now I get to do that. I feel incredibly fortunate and incredibly grateful.”

ESPN fired Virk after learning he had leaked information about the company’s baseball coverage plans to the website “Awful Announcing.”

Eventually he signed a separation agreement with ESPN, agreeing to drop legal action against the network and freeing him to join DAZN – which is pronounced “da zone” – at which former ESPN president John Skipper is a top executive.

“I met with DAZN Feb. 28,” he said, “and they said to me that night, with no artifice and no agenda, ‘You’re our first choice for the show. We want you to do it. There’s nothing else. You don’t have to audition. There’s nothing we need to ask of you. We’re aware of what happened and we want you here.’”

The ESPN episode did come up, but only briefly.

The show will be on seven nights a week, with episodes that cover the entire night schedule on weekdays and two-hour shows on weekends.

DAZN has a deal with MLB that allows it to do live look-ins, similar to what the MLB Network does. Unlike MLB Network, it does not have rights to carry full games. It also does not have commercials, and it hopes to give its show a distinct flavor through its hosts’ personalities.

Among them is Scott Rogowsky, an avid Mets fan who rose to fame as host of “HQ Trivia.”

Also unlike MLBN, DAZN exists outside of traditional cable bundles, allowing it potentially to reach fans who do not have cable TV or who have cut the cord. To this point it primarily has been known in the United States for its boxing and mixed martial arts programming.

“Any time in life you get to go with something that’s relatively nascent, where you’re on the rise, you’re going to see the thing grow,” Virk said.

He said he hopes to have the same kind of success Rich Eisen did when he left ESPN to join the then-fledgling NFL Network in 2003.

“He went to the NFL and people said, ‘That will never work,’” Virk said. “A network just devoted to the NFL? That will never work. Instead he is the face of the network that covers the biggest sport in this country. He does a radio show. Eisen is a great example I’ve used in my own head where I say if I can have any ounce of success like Rich, that’s a win.”

Virk said of “ChangeUp,” “Where DAZN is changing things, you literally watch every game all the time. The best part of the show is going to be whenever the best thing is happening in baseball on that night, you’re going to see it.

“Friday night, there are 15 baseball games on. So that guy in St. Louis goes, ‘All right, I can watch the Cards game or I can just watch this channel where they’re going to show me every single game as it happens. Why wouldn’t I just watch the guys who are basically the remote for me, and they’re going to do it in a fun way, be loose and be irreverent?’”