Faced With an Ongoing Sexual-Abuse Crisis, What Are Catholic Parents to Do?

The Muslim Times has the best collection to build our beliefs on the truths rather than organized religion and direct our activism towards human rights and women rights rather than evangelism. Please see the suggested articles at the bottom

“I think it’s different for parents. We have to protect our children. That’s our No. 1 calling in life, and that comes before everything.”​

As it has been for decades, the Catholic Church is in the midst of a crisis, one whose long reach has traumatized thousands and left one of the world’s oldest institutions struggling to find a way forward. In late February, the Vatican held a high-profile conference on the sexual-abuse crisis—the revelations of decades of abuse, by priests in different parts of the globe, of children, adult seminarians, and nuns. During the conference, Pope Francis called for “concrete” change, though the Atlantic reporter Rachel Donadio wrote that, on the whole, the meeting seemed largely to be a “consciousness-raising exercise,” out of step with the “zero tolerance” that many victims’ advocates in the United States have been demanding for priests who use their power to abuse. It seems the crisis will likely drag on as the Church’s highest authorities continue their slow-moving reckoning.

What is an institutional crisis for the Church is a personal crisis for the faithful. Lay Catholics are left to grapple with what this crisis means for them, their families, and their faith. Parents in particular often feel acutely conflicted. How can they not worry about sending their children to be altar servers after reading about priests taking advantage of altar servers in the past? At the same time, devout parents who deeply love the Church naturally want their children to receive its spiritual benefits. What are they to do? 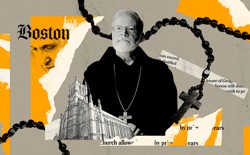 Some decide that they simply can’t reconcile their faith with decades of abuse and the subsequent cover-ups, or that the best way to protect their kids is to leave the Church. Laura Donovan, 30, says the child-sexual-abuse crisis is the reason she’s parted ways with the Catholic Church. Donovan, a social-media manager based in Los Angeles, had drifted away somewhat from her Catholic upbringing by the time The Boston Globe revealed the extent of the Catholic Church’s cover-up of Boston-area priests’ child abuse in 2002, but when she learned just how widespread the problem was, she says, “ultimately, that’s what made me think, I don’t want to go back to a Catholic church again, and I certainly don’t want to raise my own children in a religion like that.”

The Pennsylvania grand-jury report that revealed 70 years of abuse by more than 300 priests came out in August of last year, around the time Donovan’s first child, a son, was born. After becoming a parent, Donovan felt called back to Christianity and wanted to raise her family in a Church, but she and her husband “made the call not to raise him Catholic.”