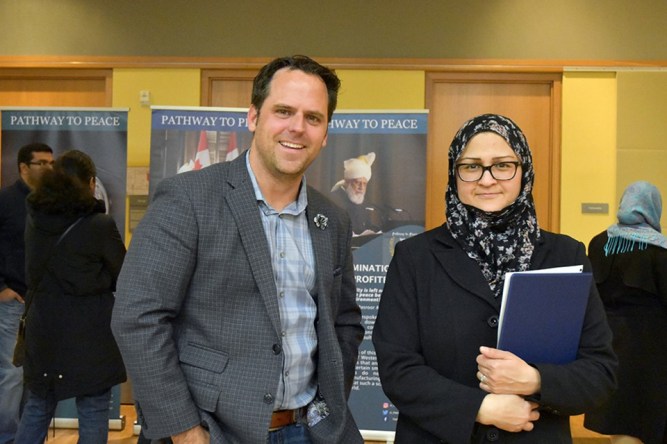 Councillor-elect Peter Ferragine, here with Mona Shah, dropped by to learn more about the heritage of Islam. Miriam King/BradfordToday

“It’s Islamic Heritage month,” explained Mona Shah. “This is really to recognize the contributions Muslims have made in history.”

And those contributions have been extensive. While Europe was still stumbling in the Dark Ages, the Muslim world was a centre for learning, preservation of Greek knowledge, and expansion of the sciences.

Six hundred years before Copernicus and Galileo suggested that the planets orbited the sun, a view challenged by their contemporaries, Al-Biruni not only proposed that the earth revolves around the sun, but that the earth spins on its axis – to scientific acclaim.

Fatima Al-Fihri was not only a woman and a scholar, but the founder of the world’s first university in Fes, Morocco, in 859 AD.

Al-Zahrawi, born in 936 AD near Cordoba, is considered the “Father of Modern Surgery” and is the first physician to use cat-gut for sutures.

“The Koran commanded them to learn about the universe, because knowledge leads to a greater understanding of God,” said Shah. It was an approach that was open and welcoming to all – not only Muslims, but Zoroastrians, Jews, and Christians. “One thousand years ago, people were actually sharing. Knowledge is the shared inheritance of all humanity.”

She noted that many of the scientific advances also had a religious application. The study of chemistry grew from the development of perfumes for worship. And the development of the astrolabe, “the GPS of its day,” helped Muslims orient their prayers to Mecca.