There’s something about women exercising power — the act of women demanding equal treatment, pay and respect — that makes certain people’s skin crawl. As the #MeToo movement has grown in scope and influence, a predictable backlash has resulted. Critics have begun to attack the campaign as a feminist vehicle run amok, an overcorrection to a problem that’s admittedly bad, but one that’s not as terrible or widespread as women’s rights advocates claim it to be. 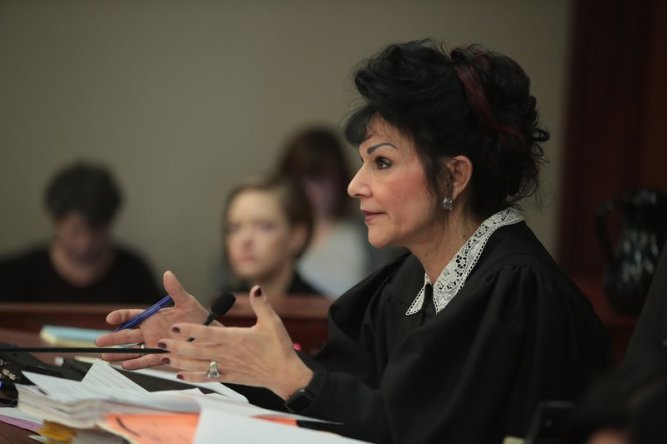 LANSING, MI – JANUARY 16: Judge Rosemarie Aquilina speaks at a sentencing hearing for Larry Nassar for molesting about 100 girls while he was a physician for USA Gymnastics and Michigan State University, where he had his sports-medicine practice on January 16, 2018 in Lansing, Michigan. Nassar has pleaded guilty in Ingham County, Michigan, to sexually assaulting seven girls, but the judge is allowing all his accusers to speak. Nassar is currently serving a 60-year sentence in federal prison for possession of child pornography. (Photo by Scott Olson/Getty Images)

This week, that backlash spilled over into the courtroom with critics claiming that Michigan Judge Rosemarie Aquilina went way too far in condemning and sentencing former USA Gymnastics and Michigan State University physician Larry Nassar. She sentenced him to up to 175 years on top of the 60 he’s already serving on child pornography charges, saying, “I just signed your death warrant.”

Nassar stood accused of using his position as a doctor to molest more than 150 girls and women under the guise of treating their injuries. But Nassar, who initially denied any wrongdoing, could see the writing on the wall. Fearing powerful testimony from his accusers, Nassar pled guilty to seven counts of first-degree criminal sexual misconduct, a move that could have prevented the public from hearing in detail the heart-wrenching accounts of his victims. But the women and Judge Aquilina were not ceding that kind of control to Nassar. He was not going to silence his victims any longer — their voices would not go unheard. Even though they would not be given an opportunity to present testimony as witnesses in Nassar’s criminal trial, Judge Aquilina allowed 156 women to step up to the podium and tell their stories via impact statements. The stories of these courageous women, some of whom are household names because of their Olympic triumphs, have been heard by millions of people around the world.