Amasra: A town molded by the spirits of the ancients 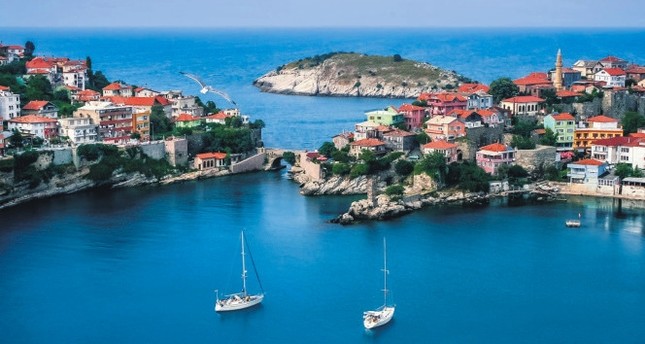 Like any other Black Sea towns, Amasra is blessed with greenery; but what makes it different is its ancient history dating back to the 30th century B.C.

Built on the remains of ancient settlers in the Black Sea region, Amasra is a city that once thrived under the rule of the Romans and Byzantines. Now, this small town looks to go back to its glory days through tourism and archeology

Established in the 30th century B.C., Bartın province’s Amasra district once served as a center for the Roman and Byzantine civilizations and now stands as a modern testament of its rich history and timeless natural beauty.

In this small but mesmerizing town, you will find yourself in one of the most popular seaside spots Turkey has to offer. Here, there is never an off-season, and visitors travel year-round to discover the district’s spectrum of colors in their natural, uninterrupted landscape. When the first snow flurries dust Amasra’s ground, the town transforms into a winter wonderland, offering a cozy winter getaway.

Apart from its natural beauty, Amasra is also working to preserve its 5,000-year history through its ancient city. Interestingly, it has been reported that 40 percent of its ancient city is still hidden underground.

Amasra is believed to have first been inhabited during the early Bronze Age and saw its brightest era under the tutelage of Persian Princess Amastrine. The area still hosts many sites and artifacts from the Hellenistic, Roman, Byzantine, Seljuk and Ottoman periods, with excavations uncovering remnants of magnificent structures that once dotted the region.

Although the items have played a significant role in understanding the vast history of the area, experts believe that half of the ancient city still lies hidden.

In an area now home to around 6,000, excavations have unearthed traces and remnants that have provided evidence of an ancient, massive Roman settlement that once boasted a population of between 40,000 and 50,000.

Stating that archaeologists from all over the world have studied the streets and structures of the ancient city through the digital maps prepared by the Museum Directorate, Aydın continued, “We can say that Amasra, which was formerly known as Amastris, is an ancient city that not only had magnificent and monumental public structures, such as streets with marble pillars, basilicas, temples and stadiums, but also impressive civil architecture, as well.”

Throughout the centuries and even up to the present, Amasra has always been a popular spot for travelers from all over the world. Centuries of written notes left behind by wanderers have provided evidence of the city that was once home to various important monuments, tracing back to the first settlers’ cave dwellings.

“However, very few structures have survived to today. Some of them were under layers of dirt left behind by centuries of periodic flooding. We have come across examples of them during the excavations conducted by the Museum Directorate. Many structures, such as Roman bathrooms, meeting rooms and houses with mosaic floors, have been uncovered. For example, we know that there are Roman villas behind the museum. If a Roman bathroom was found in the city center, we can assume that there are also important structures under the apartments,” the director said.

Aydın said that the layout of the ancient city has been pieced together through evidence uncovered during archaeological excavations, the first concrete example surfacing with the remains of a temple featuring columns 4 meters in height.

Archaeologists believe that there are still many artifacts just waiting to be discovered in the ancient district. According to estimates, nearly 40 percent of the ancient city is still waiting to be unearthed.

“We discovered that a huge part of Amasra’s history is lying underground. Some of these ancient remains are under the fields. However, we fear that modern buildings have been built on top of the ancient settlement, which makes it hard for us to excavate. The protection of the areas and passing them down to the next generations are important to preserve our cultural history and heritage. We plan on unearthing the district’s ancient city through careful excavation.”

Remarking there are already numerous already discovered archaeological treasures in Turkey, especially originating from the Mediterranean basin, and all around the world, Aydın added that they have been conducting conservation projects to prevent the destruction, demolition and loss of the district’s cultural heritage.