The Muslim world must wake up from its slumber 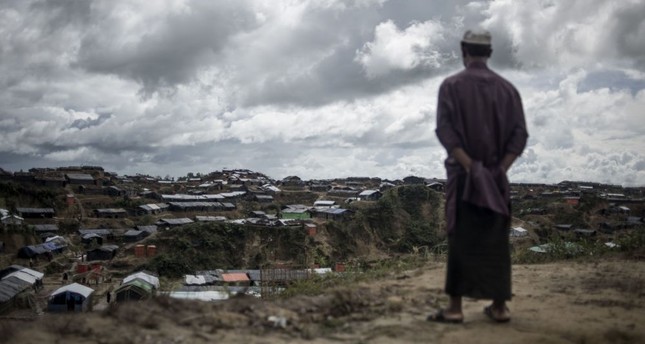 A Rohingya Muslim refugee looks on while standing in front of tents at the Balukhali refugee camp in Bangladesh’s Ukhia district, Oct. 6.

The troubling picture of the current state of the Muslim world is a reflection of its inner chaos, disorder and poverty. This is where the fight must start

Muslim nations are faced with a score of internal and external problems. As hard and excruciating as they may appear to be, they are not insoluble. A serious reckoning is needed to address them. Muslim countries do not live in isolation. They are part of the current global order, which is undoubtedly unfair, dysfunctional and discriminatory. The legacy of colonialism is still alive and continues to keep Muslim nations under pressure. The global race for power, supremacy and proxy wars have a heavy toll on their present and future. There is much blame to go around for external interventions that seek to maintain an order of hegemony and exploitation.

But Muslim nations also suffer from self-inflicted wounds. Internal divisions, lack of vision and leadership, bad governance, misuse of natural resources, ethnic nationalism and sectarianism cripple their true potential and render them vulnerable to manipulation. Absence of political and economic power is only matched by intellectual impoverishment. Failure to have a proper understanding of tradition on the one hand and modernity on the other lead to all sorts of identity and self-perception problems. Homegrown terrorism and violent extremism, fed and manipulated by various factors and stakeholders, not only put Muslims to shame but also destroy lives and hopes for a better future.

Muslim countries own a significant portion of the world’s natural resources including oil, gas, minerals and forestry. They have a younger population compared to Europe, Japan and the United States. But their contribution to the world’s GDP is very small. Muslims make up 21 percent of the world’s population (1.5 billion) but account for only 5 percent of the global GDP (a little less than $5 trillion). The average GDP per capita is around $5,000, which is three times less than the global average of around $13,000. Only a few Muslim countries have a sustainable model of development and show signs of success for alleviating poverty and for the equal distribution of wealth. Only a handful of universities in Muslim countries make it to the world’s top one or five hundred list. The number of scholarly and scientific output in these universities and research institutes is negligible.

Overall, this is not a good picture. And this is where we must start: we have to accept that this is not a bright scene and stop pretending that just because we believe in God we will always be successful. Faith implies intelligence and requires hard work and commitment. We have to understand that we cannot wait for others to do what is good for us. We have to claim the agency of our own actions and work harder than ever to shape our own future. Without a sense of ownership and direction, we cannot claim to be a force for good for ourselves and for others.

We have to go beyond different versions of petty nationalism and adopt a wider point of view on the world. None of our local and national problems will be solved without paying attention to our neighbor’s problems. No matter how many locks we put on, our house will not be safe without building a safe and peaceful neighborhood for everyone. As our problems are interrelated and require partnership, we have to work together. Disunity in the Muslim world comes with a heavy price for every major issue from Palestine to Somalia, from fighting terrorism and violent extremism to poverty alleviation.

Unity does not mean uniformity and plurality does not mean chaos and disorder. The trick is to see the unity behind the multiplicity of forms. This principle, which Ibn al-Arabi calls “unity-within-diversity,” applies to all realms of existence. It is an attempt to see the world with all of its dimensions without losing the overarching perspective of unity and integrity. What is ironic and sad about the lack of unity in the Muslim world is that the Islamic faith is based on the fundamental principle of divine unity (tawhid) but Muslim nations cannot reach unity neither in their souls nor in their collective actions. As Mulla Sada says, those who cannot realize unity within their soul cannot grasp the meaning of God’s unity. The result is chaos, disorder and a pitiful waste of spiritual, intellectual and natural resources.

The Muslim world must wake up from its slumber and take ownership of its present and future. Blaming only others for our own problems will not solve our problems. It will only lead to intellectual laziness and a false sense of comfort. There is no doubt that we have to take our guard against exploitative and imperialistic interventions. But we also have to put our house in order.

We cannot give a proper fight in the outside world without first reaching inner peace, strength and integrity. What is out there is a manifestation of what is inside us. The troubling picture of the current state of the Muslim world is a reflection of its inner chaos, disorder and poverty. This is where the fight must start.