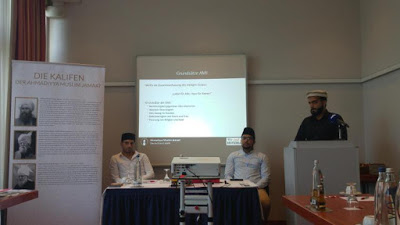 Only a small minority of the Muslims are responsible for terror. The Ahmadiyya Muslim Jamaat community wants to spread this message as part of an Islamic information campaign in the district of Karlsruhe. In this way, distances are to be reduced and cooperation is promoted.

“In the face of the unspeakable terror in the name of Islam, we as Muslims feel obliged to educate the people about homeland love and loyalty to the country as part of Islam.” With these words, the Muslim community of Ahmadiyya Muslim Jamaat (AMJ)in Karlsruhe had invited to the idea of ​​an action by which they would clean up the prejudices against people of their faith and thus improve the “negative image”.

Under the motto “We are all German” they want to travel through the district of Karlsruhe from July to September and visit all the localities. In parallel, this Islam-Info-Campaign is to take place throughout Germany. They want to build up information centers and clarify questions from the population, explain the initiators.

Previously, in the Karlsruhe district no actions were planned, because they were already regularly represented with infostands. The dates have not yet been fixed, but will soon be published on the municipality’s website. In addition, they want to organize events to promote dialogue.