Meet the women who run their law firm in Pakistan 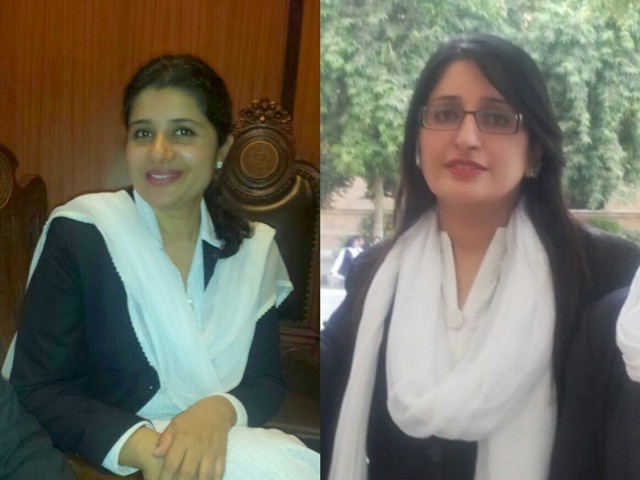 It was their first day at Punjab Law College, Rawalpindi in 1999 and Ambreen Nawaz Chaudhry and Aaliya Zareen Abbasi were beyond themselves with happiness to have made it there, sitting among this group of future lawyers. When the lecturer asked who in the class had passed college in the first division, both their hands shot up in the air, not at all expecting what happened next.

The lecturer looked at them and said “you, get lost” – a command to leave the classroom. Confused and upset, both women stepped out, each wondering what they had done wrong as they took their punishment – an hour of standing out in the scorching sun.

When he finished the lecture, he brought them back into the class and asked what were they thinking when they made the choice to become lawyers. “Third division holders usually come into this profession,” the women recall him as saying. “This is your mistake and you will have to suffer forever.”

The professor could not have been more wrong. Some18 years on, not only are Abbasi and Chaudhry thriving in the profession, but they are also the proud owners of their very own law firm.

In an increasingly male-dominated profession, it is incredibly rare to find law firms in Pakistan that are owned and run by women. So, it is equally incredible that Abbasi and Chaudhry are breaking the glass ceiling and becoming an inspiration for hundreds of young Pakistani women.

Chaudhry and Abbasi have been practicing since 2002 and work in the lower and high courts. The journey to where they are today has been fraught with obstacles that they overcame in their stride.

Although Abbasi and Chaudhry are unrelated by blood, they share a more deeper bond as their foray into the field of law transpired from their personal and family circumstances, like a story straight out a Pakistani TV serial. Both have a similar family structure and back story – having only sisters and no brother in their respective families.

As it happens with a lot of women-only families in Pakistan, after the passing of their fathers, their properties and possessions were illegally acquired by other male family members. It was years later that they finally took their own cases into court after getting a law degree, and fought for their rights and won.https://tribune.com.pk/story/1438946/breaking-glass-ceiling-meet-women-run-law-firm/#sthash.xelRZ0KT.dpuf

Chaudhry’s property dispute ended in 2009 after an 18-year-long litigation. Abbasi, who had decided to join the legal profession because she was not satisfied by how their family’s lawyer was handling their case, won her property case in 2006.

The duo has come a long way since they began their practice in 2002. They’ve established their own law firm – Muhammadans Advocates & Corporate Consultants – and take mostly corporate, family and criminal cases.

“Bringing a smile to an aggrieved person’s face gives us extreme satisfaction,” said Abbasi, who explained that resolving cases was more important to them than winning. “The law should excel. Don’t look at who is speaking, focus on what is being said,” she added.

Girl power: Female lawyers all set to take on the boys

Perhaps, the mark of a true leader is that they remember the criticism being hurled at them and instead of being discouraged, they learn from it. As such, Abbasi and Chaudhry vividly recall all the naysayers they encountered but didn’t pay heed to.

“Our seniors used to make fun of us, telling us to focus on making money instead of looking for gratification from each and every case. But we decided to do otherwise,” said Abbasi.

Chaudhry recalls one such case – a 73-year-old client who was involved in a property dispute. “We knew from the beginning that the lady would not be able to get her case resolved if it kept moving through the lower court and eventually higher court,” she said.

She was entitled to Rs170 million, but Chaudhry said they advised her to settle the case for a lesser amount.