USA: American Fascism, in 1944 and Today 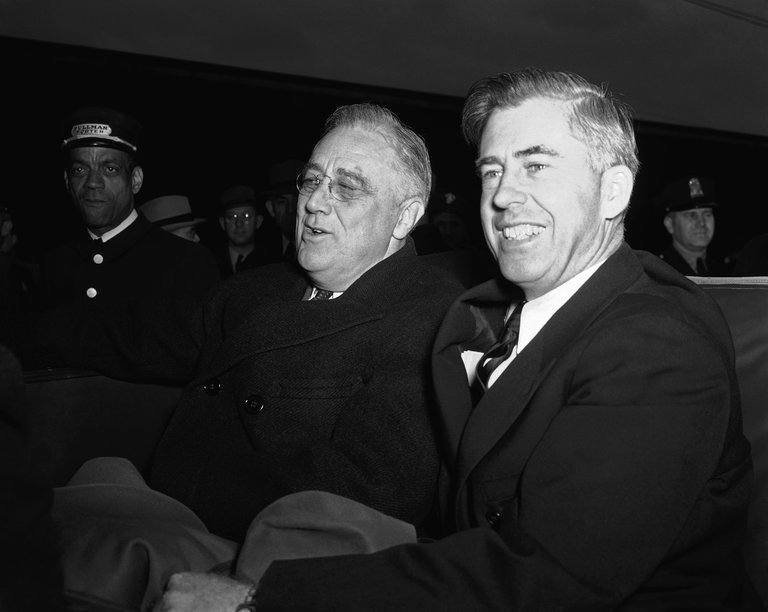 Seventy-three years ago, The New York Times asked the sitting vice president to write an article about whether there are fascists in America, and what they’re up to.

It was an alarming question. And the vice president took it quite seriously. His article, “The Danger of American Fascism,” described a breed of super-nationalist who pursues political power by deceiving Americans and playing to their fears, but is really interested only in protecting his own wealth and privilege.

That vice president was my grandfather, Henry A. Wallace. And in my view, he predicted President Trump.

To be clear, I don’t think the precise term “fascism” — as in Mussolini and Hitler — is fairly applied to Mr. Trump. Mussolini was a proponent of “corporatism,” defined by some as “a merger of state and corporate power.” And through that lens, using that term, my grandfather’s warning looks prescient.

My grandfather warned about hucksters spouting populist themes but manipulating people and institutions to achieve the opposite. They pretend to be on the side of ordinary working people — “paying lip service to democracy and the common welfare,” he wrote. But at the same time, they “distrust democracy because it stands for equal opportunity.”

They invariably put “money and power ahead of human beings,” he continued. “They demand free enterprise, but are the spokesmen for monopoly and vested interest.” They also “claim to be super-patriots, but they would destroy every liberty guaranteed by the Constitution.”

They bloviate about putting America first, but it’s just a cover. “They use isolationism as a slogan to conceal their own selfish imperialism.”

They need scapegoats and harbor “an intensity of intolerance toward those of other races, parties, classes, religions, cultures, regions or nations.”

The 19th century saw the political rise of wealthy Prussian nobility, called Junkers, who were driven by “hatred for other races” and “allegiance to a military clique,” with a goal to place their “culture and race astride the world.”

Every weekday, get thought-provoking commentary from Op-Ed columnists, the Times editorial board and contributing writers from around the world.

My grandfather acknowledged the great difference between American fascists and other countries’ murderous authoritarians. The American breed doesn’t need violence. Lying to the people is so much easier.

They “poison the channels of public information,” he wrote. Their “problem is never how best to present the truth to the public but how best to use the news to deceive the public” into giving them more money or power.

In fact, they use lies strategically, to promote civic division, which then justifies authoritarian crackdowns. Through “deliberate perversion of truth and fact,” he said, “their newspapers and propaganda carefully cultivate every fissure of disunity.”

Thus might lying about unprecedented high crime rates legitimize a police state. Lying about immigrants being rapists and terrorists might justify a huge border wall, mass expulsions and religion-based immigration bans. Lying about millions of illegal votes might excuse suppression of voting by disfavored groups.

Here’s one of my favorites: Autocrats “give currency to snide suspicions without foundation in fact.” That sounds like birtherism. There are other examples. “Largest” inaugural crowd ever. “I won the popular vote” and “Obama had my ‘wires tapped.’ ” Climate change is “nonexistent” and “mythical.” “The Russia-Trump collusion story is a total hoax” and the F.B.I.’s investigation into it — now jeopardized by the firing of the F.B.I. director, James Comey, this week — was a “taxpayer funded charade.”

And what is the ultimate goal? “Their final objective toward which all their deceit is directed is to capture political power so that, using the power of the state and the power of the market simultaneously, they may keep the common man in eternal subjection.”

That sounds like Mussolini and his embrace of “corporatism” — the marriage of government and corporate power. And it also sounds like President Trump.

The antidote? For my grandfather, it lay in that phrase the “common man.” In 1942, he famously rebutted conservatives calling for an “American Century” after the war — America, the greatest country on earth, dominating the world.

Nonsense, my grandfather said in that speech: We Americans “are no more a master race than the Nazis.” He called for a “century of the common man” — ordinary people, standing up and fighting for their rights, with decent jobs, organized (into unions), demanding accountable government committed to the “general welfare” rather than the privilege of the few, and decent schools for their kids (teaching “truths of the real world”). Democracy, he said in his 1944 essay, must “put human beings first and dollars second.”

If there’s any comfort in his essay 73 years ago, it is that this struggle is not new. It wasn’t even new then. The main question today is how our democracy and our brash new generation of citizen activists deals with it.

Categories: The Muslim Times, US, US Politics, US PRESIDENT