Quran scholar and exegete, and educationist, who extended the work of his tutor, Amin Ahsan Islahi,[3] Ghamidi is the founder of Al-Mawrid Institute of Islamic Sciences and its sister organisation Danish Sara.[3] He became a member of Council of Islamic Ideology on 28 January 2006 for a couple of years,[4][5] a constitutional body responsible for giving legal advice on Islamic issues to Pakistan Government and the Parliament. He has also taught at the Civil Services Academy from 1980 until 1991.[3] He is running an intellectual movement similar to Wastiyya in Egypt on the popular electronic media of Pakistan.[6]

Ghamidi’s discourse is primarily with the traditionalists on the one end and Jamaat-e-Islami and its seceding groups on the other.[6] In Ghamidi’s arguments, there is no reference to the Western sources, human rights or current philosophies of crime and punishment.[6]Nonetheless he reaches conclusions which are similar to those of Islamic modernists and progressives on the subject, within the traditional Islamic framework.[6]

Ghamidi was born on 18 April 1951 in a Muslim family from Jiwan Shah near Pakpattan, Sahiwal, Pakistan.[6] His father belongs to a town called Daud some 80 kilometres from Lahore, near Ravi river. His father follows qadri junaidi Sufi order. He has two elder sisters. His early education included a modern path (Matriculation from Islamia High School, Pakpattan), as well as a traditional path (Arabic and Persian languages, and the Qur’an with Mawlawi Nur Ahmad of Nang Pal).[6] He later graduated from Government College, Lahore, with a BA Honours in English in 1972.[7] Initially, he was more interested in literature and philosophy. Later on, he worked with renowned Islamic scholars like Sayyid Abul Ala Maududi and Amin Ahsan Islahi on various Islamic disciplines particularly exegesis and Islamic law.[3]

In his book, Maqamat (مقامات), Ghamidi starts with an essay “My Name” (میرا نام) to describe the story behind his surname, which sounds somewhat alien in the context of the Indian Subcontinent. He describes a desire during his childhood years to establish a name linkage to his late grandfather Noor Elahi, after learning of his status as the one people of the area turned to, to resolve disputes. This reputation also led to his (grandfather’s) reputation as a peacemaker (مصلح). Subsequently, one of the visiting Sufi friends of his father narrated a story of the patriarch of the Arab tribe Banu Ghamid who earned the reputation of being a great peacemaker. He writes, that the temporal closeness of these two events clicked in his mind and he decided to add the name Ghamidi to his given name, Javed Ahmed.[8] 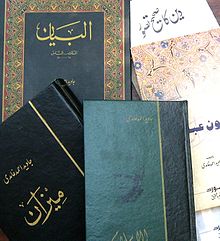 Some of the works of Ghamidi

Ghamidi believes that there are certain directives of the Qur’an pertaining to war which were specific only to Muhammad and certain specified peoples of his times (particularly the progeny of Abraham: the Ishmaelites, the Israelites, and the Nazarites). Thus, Muhammad and his designated followers waged a war against Divinely specified peoples of their time (the polytheists and the Israelites and Nazarites of Arabia and some other Jews, Christians, et al.) as a form of Divine punishment and asked the polytheists of Arabia for submission to Islam as a condition for exoneration and the others for jizya and submission to the political authority of the Muslims for exemption from death punishment and for military protection as the dhimmis of the Muslims. Therefore, after Muhammad and his companions, there is no concept in Islam obliging Muslims to wage war for propagation or implementation of Islam. The only valid basis for jihad through arms is to end oppression when all other measures have failed.[9] According to him Jihad can only be waged by an organised Islamic state. No person, party or group can take arms into their hands (for the purpose of waging Jihad) under any circumstances. Another corollary, in his opinion, is that death punishment for apostasy was also specifically for the recipients of the same Divine punishment during Muhammad’s times—for they had persistently denied the truth of Muhammad’s mission even after it had been made conclusively evident to them by God through Muhammad.[10]

The formation of an Islamic state is not a religious obligation per se upon the Muslims. However, he believes that if and when Muslims form a state of their own, Islam does impose certain religious obligations on its rulers as establishment of the institution of salat (obligatory prayer), zakah (mandatory charity), and ‘amr bi’l-ma’ruf wa nahi ‘ani’l-munkar (preservation and promotion of society’s good conventions and customs and eradication of social vices); this, in Ghamidi’s opinion, should be done in modern times through courts, police, etc. in accordance with the law of the land which, as the government itself, must be based on the opinion of the majority.[11]

Ghamidi argues that the Qur’an states norms for male-female interaction in surah An-Nur.[12] While in surah Al-Ahzab, there are special directives for Muhammad’s wives[13] and directives given to Muslim women to distinguish themselves when they were being harassed in Medina.[14][15] The Qur’an has created a distinction between men and women only to maintain family relations and relationships.[16]

Ghamidi is one of the Pakistani religious scholars who, from the beginning, has been opposing this kind of Islamism. One of his recent essays on this subject Islam and the Taliban[20]

Ghamidi is known for his stress on morals and ethics in Islam. He has raised concerns on moral and ethical issues in Muslims.

A translated snippet from his book “Ikhlaqiyat”:

Interaction with other Islamic scholars

Like Maulana Wahiduddin Khan, Maulana Naeem Siddiqui and Dr. Israr Ahmad, Ghamidi also worked closely with Maulana Syed Abul Ala Maududi (alternative spelling SyedMaudoodi; often referred to as Maulana Maududi) (1903–1979). His work with Maududi continued for about nine years before he voiced his first differences of opinion, which led to his subsequent expulsion from Mawdudi’s political party, Jamaat-e-Islami in 1977. Later, he developed his own view of religion based on hermeneutics and ijtihad under the influence of his mentor, Amin Ahsan Islahi (1904–1997), a well-known exegete of the Indian sub-continent who is author of Tadabbur-i-Qur’an, a Tafsir (exegeses of Qur’an). Ghamidi’s critique of Mawdudi’s thought is an extension of Wahid al-Din Khan‘s criticism of Mawdudi. Khan (1925– ) was amongst the first scholars from within the ranks of Jamaat-e-Islami to present a full-fledged critique of Mawdudi’s understanding of religion. Khan’s contention is that Mawdudi has completely inverted the Qur’anic worldview. Ghamidi, for his part, agreed with Khan that the basic obligation in Islam is not the establishment of an Islamic world order but servitude to God, and that it is to help and guide humans in their effort to fulfill that obligation for which religion is revealed. Therefore, Islam never imposed the obligation on its individual adherents or on the Islamic state to be constantly in a state of war against the non-Islamic world. In fact, according to Ghamidi, even the formation of an Islamic state is not a basic religious obligation for Muslims.[11] Despite such extraordinary differences and considering Maududi’s interpretation of “political Islam” as incorrect, Ghamidi in one of his 2015 interviews said that he still respects his former teacher like a father.[21]

Resignation from Council of Islamic Ideology

Javed Ahmed Ghamidi resigned in September 2006[22] from the Council of Islamic Ideology (CII),[5] a constitutional body responsible for providing legal advice on Islamic issues to the Pakistani government. His resignation was ‘accepted’ by the President of Pakistan.[23] Ghamidi’s resignation was prompted by the Pakistani government’s formation of a separate committee of ulema to review a Bill involving women’s rights; the committee was formed after extensive political pressure was applied by the MMA. Ghamidi argued that this was a breach of the CII’s jurisdiction, since the very purpose of the council is to ensure that Pakistan’s laws do not conflict with the teachings of Islam. He also said that the amendments in the bill proposed by the Ulema committee were against the injunctions of Islam. This event occurred when the MMA threatened to resign from the provincial and national assemblies if the government amended the Hudood Ordinance,[24] which came into being under Zia-ul-Haq’s Islamization. The Hudood Ordinances have been criticised for, among other things, insisting upon an exceptionally difficult and dangerous procedure to prove allegations of rape.[25]

Ghamidi had appeared on several TV Channels and appears regularly on dedicated programs. His television audience consists of educated, urban-based middle-class men and women between the ages of 20–35, as well as lay Islamic intellectuals and professionals. Ghamidi’s religiously oriented audience tends to be dissatisfied with the positions of traditional ulema and Western-educated secular-liberal elite, and find his interventions and ideas more sensible, moderate, and relevant.[26]

Ghamidi has earned criticism from traditionalist Muslim scholars in Pakistan (like Mufti Muneeb-ur-Rehman) for his interpretation of certain Islamic values.[citation needed]

In one interview, when asked his opinion about being branded as a liberal, Ghamidi replied that he does not care about such things and his objectives are not affected by these terms.[32]

Ghamidi left Pakistan in 2010[citation needed] as a result of strong and violent actions against his work. In a 2015 interview with Voice of America, Ghamidi explained his reason for departure was to safeguard the lives of people near him[33] including his neighbours who had begun to fear for their safety.[34] Some of his close associates had already been killed like Dr. Muhammad Farooq Khan and Dr. Habib-ur-Rehman, among whom the latter, was murdered in his clinic.[34] Another close associate who was related to the work of Ghamidi’s Risala, Syed Manzoor-ul-Hasan, one day after leaving Ghamidi’s office was shot through the mouth but survived although the bullet still remains in his body.[34] Ghamidi maintained that because of today’s means of communication, his work of education does not get affected by his exile.[33] Ghamidi, also regularly appears on Ilm-o-Hikmat, a Pakistani Dunya News show.[35] He has also presented his desire to return in the future when circumstances change.[34]