Protesters Take Anti-Trump Message to His Doorstep, and Plan Next Steps

Thousands of demonstrators filled public squares, parks and streets in the country’s three largest cities on Saturday to protest President-elect Donald J. Trump, part of a wave of dissent that has swelled since the presidential contest last week. 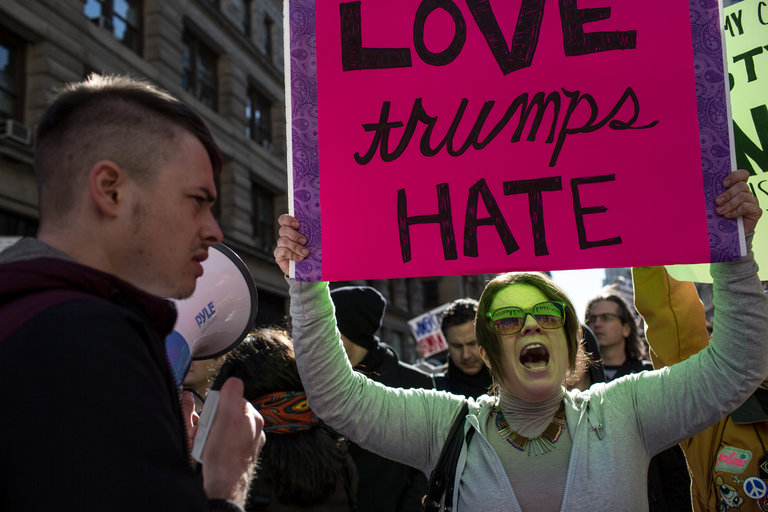 They were transgender people, the children of immigrants, and parents toting infants on their back. They were families, students, and men and women of all ages and races. Many carried cardboard signs — “Show the world what the popular vote looks like,” read one, “Putin Won,” said another. As throngs marched through city streets, the participants joined in a cry of “Not my president!”

In one of the largest anti-Trump demonstrations since his election on Tuesday, a mass of people marched from Union Square in Manhattan to Trump Tower, the headquarters and home of Mr. Trump. Protesters marched around one of Mr. Trump’s buildings in Chicago. In Los Angeles, thousands of people marched up Wilshire Boulevard, forming a crowd that stretched for nearly a dozen blocks.

“I’m just doing my part in democracy,” said Alfred Diaz, 25, who joined the protest in Los Angeles. “I feel that this is a way for me to voice my opinion.”

“I disagree with a lot of Trump’s stances, so I’m just out here practicing my rights,” said Mr. Diaz, who was born in Los Angeles but whose family is from Mexico. “I’m unsure and I’m unsatisfied.”

The demonstrations followed a week of protests, as thousands of people have taken to the streets. Demonstrations have taken place in Oakland, Calif.;Baltimore; Kansas City, Mo.; Milwaukee; Miami; and Portland, Ore.

Students have walked out of classes, protesters have blocked highways and demonstrators have clashed with the police. Speakers and protesters have talked about their fears of deportation, reduced access to to birth control, a rollback of same-sex marriage and the potential for racially motivated violence.

“We need to protest what we believe to be a disturbing turn in politics this week,” said Kimie Liu, 40, as she stood near Trump Tower in New York with her 14-month-old son, Kellan, strapped to her back. “My son is here because this is the future. Trump stands for so many things I find abhorrent, and we won’t sit down when hate wins. We stand for what we believe in.”

The demonstrations have mostly been organized on the fly by local activist groups, although national organizations like Showing Up for Racial Justice and the National Action Network have supported the protest efforts. The calls to participate have come largely through Facebook and other social media.

Most of the gatherings have remained peaceful, but tempers have flared sporadically. Demonstrators burned trash cans in Oakland on Wednesday night, and tried to block a highway on Thursday before the police intervened. In Portland on Thursday night, one marcher was shot, according to local reports. And after the protest there thinned out, dozens of people the police described as anarchists remained in the streets, clashing with officers. Car windows were smashed and smoke filled the air during what the police deemed a riot.

In New York on Saturday, protesters were quick to describe their motivations for marching.

Shaké Topalian, 71, a child of Armenian immigrants, said she was fearful of a genocide like the one her parents had survived. “I want to make sure that this does not happen again,” she said. “I refuse to be a bystander.”

Fin Justin Ross, 20, a transgender man from New Jersey, said he had woken up around 3:30 a.m. on Saturday to pick up friends for the rally. “When Trump won, my first thought was I needed to go back into the closet,” he said.

Virginia Jimenez, 45, a Mexican-American from Long Island said she came to the protest to show that “not all Mexicans are bad people,” she said, adding, “I raised three sons without asking for any handouts.”

Lisa Harris, also of Long Island, spoke about her father, a Holocaust survivor. “I know hate,” she said.

Many protest leaders had supported Senator Bernie Sanders of Vermont in the Democratic primary race and either did not vote or chose a third-party candidate in the general election, said Ben Becker, an organizer with the Answer Coalition, an antiwar and antiracism activist group based in New York. Their anger, he said, had been exacerbated by the conciliatory tone shown to Mr. Trump by President Obama and Hillary Clinton after Mrs. Clinton’s defeat.

More protests are planned for the coming days, and preparations already are underway for a large demonstration at Mr. Trump’s inauguration in January.

It is uncharted territory for a modern American presidency. One would have to go back to Abraham Lincoln’s election in 1860 to see these types of widespread demonstrations in response to the election of a president, said Douglas G. Brinkley, a presidential historian who teaches at Rice University in Houston.

President Lincoln won only about 40 percent of the popular vote and was not even on the ballot in some Southern states. Spontaneous protests broke out across the country after the Lincoln victory, Professor Brinkley said.

For many of the people who have turned out for the current protests, it has been a kind of group therapy, and already seem to be cementing new, cross-sectional liberal coalitions. People with “Nasty Women” T-shirts have stood with signs that read “Climate change is real.” Black Lives Matter protesters have marched alongside those proclaiming themselves “Undocumented and Unafraid.”

But beyond the commotion in the streets, activists are pursuing strategies for what they think will be tumultuous times during a Trump administration.

In Wisconsin, the Latino rights group Voces de la Frontera has scheduled forums to provide emotional support to Latinos and other minorities, and to brainstorm ways to help immigrants fight policies that might hurt them.

Cat Brooks, a co-founder of the Anti Police-Terror Project in Oakland, said her group and other leaders in the city were planning to raise money to provide direct services for social programs they feel certain will be cut under a Trump administration and a Republican-controlled Congress. They were making plans, for example, to find ways to offer diabetes testing and counseling if the Affordable Care Act is repealed.

Ron Gochez, an organizer with Unión del Barrio, an immigrants rights group in Los Angeles, said that it will gather community organizations to discuss what to do if mass deportations occur. It will also train undocumented immigrants to use their cellphone cameras if immigration enforcement agents show up at their door, and help people set up emergency phone lists so they can call neighbors if they are picked up for deportation proceedings.

“It’s not just saying that we’re against Trump, we have to defend ourselves against the policies he’s promising to create,” he said.

Leaders from several black civil rights groups like the National Action Network and the N.A.A.C.P. have been holding conference calls to form a legislative strategy, the Rev. Al Sharpton said.

They plan to lobby Congress on criminal justice reform and expanding voting rights, highlighting what they believe are the negative effects of voter identification laws and reductions in early voting periods, Mr. Sharpton said. They hope to use the stories of millions of newly insured Americans to highlight the devastating consequences of repealing the Affordable Care Act. They will fight any new stop-and-frisk policies in court, Mr. Sharpton said, and bring witnesses to congressional hearings to challenge cabinet appointments they see as questionable.

Their efforts will kick off with a rally and a march in Washington for the Rev. Dr. Martin Luther King Jr.’s birthday, just days before Mr. Trump is inaugurated, Mr. Sharpton said. “We’re not going to go away and say, because we lost an election, that we, therefore, lost our right to stand up for civil rights and civil liberty,” he said. “This, in many ways, we feel is bigger than one election.”

As the protest began to wane in Los Angeles, Jay Brown Jr., 42, surveyed the large group around him.

“If you look around, there are a lot of families out here,” he said. “That should say something to you. People are trying to teach their kids what’s acceptable.”

Categories: The Muslim Times, US elections, US PRESIDENT