The Afghan girl whose piercing eyes made her famous when her photo appeared on the cover of National Geographic magazine has been reportedly been arrested on suspicion of corruption.

Sharbat Gula, photographed as a 12-year-old inhabitant of a refugee camp in 1984, now faces the possibility of spending 14 years in jail, it was reported.

The extraordinary twist in Ms Gula’s story was, some commentators suggested, an episode which highlighted the desperate measures many Afghans are willing to take to avoid returning to their war-torn homeland as Pakistan cracks down on undocumented foreigners.

Ms Gula first caught the world’s attention after National Geographic’s Steve McCurry took a photo of her at a refugee camp near Peshawar in 1984.  Her haunting image, showing her staring at the camera with startlingly bright green eyes, appeared on the cover of National Geographic Magazine in June 1985.

It went on to become the most famous cover image in the magazine’s history.  Her name initially unknown, Ms Gula became known to the world as “Afghan girl”, or more poetically as “the Mona Lisa of the Afghan war” – which at that time involved the country being occupied by Soviet, rather than Western-backed forces.

Her parents had been killed during Russian bombing of Afghanistan when she was about six years old.

McCurry later tracked her down, after a 17-year search, to a remote Afghan village in 2002.  Her eyes still piercing, but her face showing the ravages of time, she was married to a baker and the mother of three children.  Another child died in infancy. 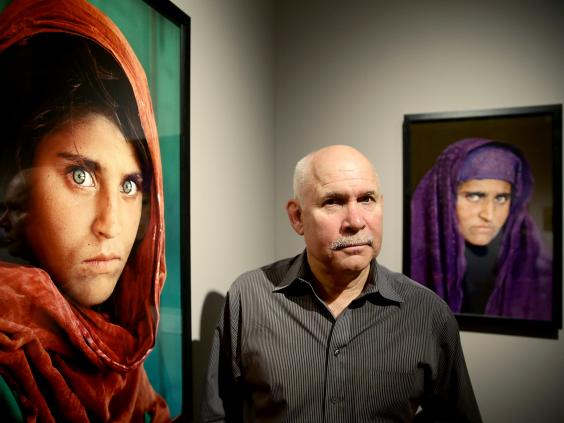 She expressed hopes that her children would be able to get an education. When asked if she had ever felt safe, she replied “No. But life under the Taliban was better. At least there was peace and order.”

Asked how she had survived, she responded that it was “the will of God”.

Until McCurry found her again, Ms Gula had never seen the photo of herself as a child.

She came to public attention again last year when Pakistani newspapers reported that the National Database and Registration Authority (Nadra) had cancelled national identity cards issued to her and two men listed as her sons amid claims the cards had been issued illegally.

At the time a Nadra source told Dawn: “They may not be her sons but this is a common practice among Afghan refugees whereby they list names of non-relatives as their children to obtain documents.”

Mr Ilyas said the authorities were also seeking three Nadra officials found responsible for issuing Pakistan’s national identity card to Gula, who have been at large since the alleged fraud was detected.

Pakistan has for decades provided safe haven for millions of Afghans who fled their country after the Soviet invasion of 1979.

The country hosts 1.4 million registered Afghan refugees, according to UNHCR, making it the third-largest refugee hosting nation in the world.

But refugees are increasingly worried about their future in Pakistan as the country cracks down on those who have obtained fake ID cards.

A Nadra official told AFP that 2,473 foreigners, mostly Afghans, had voluntarily surrendered their ID cards which were obtained fraudulently.

Some 18 Nadra officials were under investigation for issuing ID cards to foreigners and eight were arrested, the official said.