Protesters in Brittany take to the sea fully clothed after video emerges of a veil-wearing Muslim woman being asked to leave the beach in Nice, despite France’s top court ruling burqini-bans are illegal.

Some thirty beach-goers went for a dip fully-clothed on the beach of Douarnenez in Brittany on Sunday to show their solidarity with Muslim women and to demonstrate their anger at the recent spate of burqini bans.

Photos taken at the beach show both men and women participating in the protest, wearing clothes and even head coverings whilst swimming in the sea.

The protest was organised by local feminist group “Le Planning familial du Finistere”, who wished to stand up against burqini bans recently imposed in around 30 towns in France. 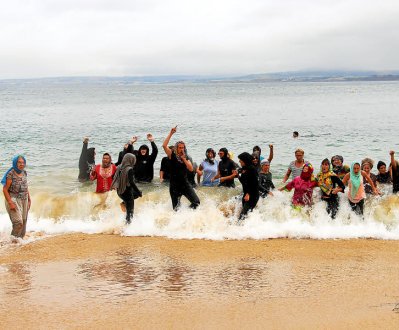 “These Muslim women are French women, and the anti-burqini rules were persecuting them. It’s intolerable”, one member of the group told a local newspaper.

Monique Prevost, who organised the protest on the beach, told The Local: “We wanted to show our solidarity with these women.’

She explained that idea to gather in protest of the burqini bans came to her and her friends last minute on Friday evening.

“We were discussing how the burqini is all anyone is talking about these days and how the ban isn’t justified.  We discussed how we could denounce the grotesque side of the situation that has developed,” she added.

“We decided to gather on the beach as a way of showing our solidarity with these women.’

She told The Local that the reaction to their beach protest has been overwhelmingly positive.

“Photos of us on the beach have been shared and liked thousands of times. As of yet we have only received one hostile comment in response,” she said.

The protest in support of women choosing to wear the burqini came as a video emerged of a Muslim woman apparently being asked to leave the beach in Nice, southern France, because she was wearing a veil.

The incident occurred on Saturday, a day after France’s highest administrative court overturned the ban on burqinis at a nearby resort.

The ruling was supposed to set a precedent but local authorities in Nice refused to accept it.

According to Nice Matin newspaper which published the video, the police arrived in a patrol boat and approached the woman from the sea.

She was informed that there was a rule about what she could wear on the beach.

She told the police she was not actually swimming in the sea, but nevertheless left the beach with her and her family.