The massacre of partygoers at Pulse, a gay club in Orlando, took me back to the late summer of 2005, when an African American woman, wearing a tight headscarf over her staff uniform, stormed out of the kitchen and into a conference room at an Atlanta Holiday Inn, shouting: “You’re all going to burn in hell!”

I froze. Around me were about 50 brave souls from Al-Fatiha, a gay American Muslim organization, many of them young men secretly at the organization’s annual conference while their parents attended a meeting of the conservative Islamic Society of North America. That weekend, I prayed shoulder to shoulder with them — a gay man leading us in prayer, a transgender Muslim beside me.

I’m a straight Muslim feminist, but, like my friends at Al-Fatiha, I’m a criminal, too, in the view of many Islamic clerics today. My crime under conservative Sharia law: giving birth to a baby boy 13 years ago while single.

A strict strand of Islamic law metes out an unforgiving approach to straight sex outside of marriage, called Zina, and gay sex, called Liwat when it involves men, from the Biblical and Quranic story of Lot. As leaders of American Muslim groups rush to condemn the carnage in Orlando, it is important to note the persistence of these sex laws in Islam and to support Muslim reformers trying to repeal them.

We are never going to see a real cultural shift in the Muslim mind-set about sex and homosexuality until we call out and repeal these scarlet-letter sex laws, and instead choose an interpretation of Islam that values compassion, privacy, acceptance and love over judgment and bigotry. 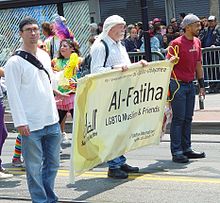 Just one day after the Orlando massacre, a Dutch woman in Qatar was convicted of the crime of “illicit sex” — for coming forward with the complaint that she had been raped. Several years ago, a Norwegian woman faced similar charges in the United Arab Emirates. Meanwhile, the Islamic State is throwing men accused of homosexuality off rooftops, and the governments of Iran and Saudi Arabia have executed gay men.

Of the 57 states that belong to the Organization of Islamic Cooperation, a quasi-United Nations for countries with large Muslim populations, at least 23 have Zina laws and 38 criminalize consensual adult same-sex, according to data from human rights groups and the International Lesbian, Gay, Bisexual, Trans and Intersex Association. These governments are promoting an interpretation of political Islam, or Islamism, that feeds this culture of punishment for even consensual sex.

Puritanical Islamic sex laws feature a hierarchy of punishment, based on the Koran and the Sunnah, or sayings and traditions of the prophet Muhammad, of stoning to death for those who are married and have sex outside of their marriages and “100 stripes,” or lashes, for premarital sex.

The punishments are even worse for gays. Influential Saudi cleric Muhammad Saalih Al-Munajjid, following the rigid interpretation of Islam known as Wahhabism or Salafism, condemns Zina as a crime and calls homosexuality “the most abhorrent of deeds,” calling for “execution of homosexuals,” from having them “burned with fire,” “stoned to death” and “thrown down from a high place then have stones thrown at them.”

As in the West, cultural attitudes are closely intertwined with legislation. Babies born out of wedlock, gay sex, transgender relationships and other forms of allegedly illegal sex are shamed, stigmatized or punished — whether by court of law or by vigilante justice, as we saw in Orlando last weekend.

As I see pictures of the fresh-faced partygoers at Pulse, their lives cut short by the homophobia that reflects Islamic scarlet-letter laws, I remember nights at gay clubs everywhere from Manhattan to my hometown of Morgantown, W.Va. Early last year, at Vice Versa, on an alley off High Street in downtown Morgantown, I sat off-stage with my niece and my mother, Sajida Nomani, who had to wear a full face veil growing up in India in a conservative Muslim family, to protect her from the threat of zina.

Strobe lights flashing around us, we cheered the transgender beauty queens competing in the “Miss Vice Versa Large and Lovely” contest. It was my mother’s first time in a gay club. In a symbol of our efforts to take back our Muslim religion from the apostles of intolerance, it won’t be our last.

Asra Q. Nomani a former Wall Street Journal reporter, is the author of “Standing Alone: An American Woman’s Struggle for the Soul of Islam.” She is co-founder of the Muslim Reform Movement.