A man who was arrested in Seattle on Tuesday after making violent threats on social media against an area mosque is being held for malicious harassment, police documents obtained by BuzzFeed News show.

The man, identified in a police report as Robert K. Farris, 37, was arrested after a brief standoff with police at his North Seattle apartment after the man’s friend alerted Seattle police of numerous violent Facebook posts earlier in the day.

Farris allegedly began his Facebook rant by saying, “I don’t care who reads this, I will take revenge.” 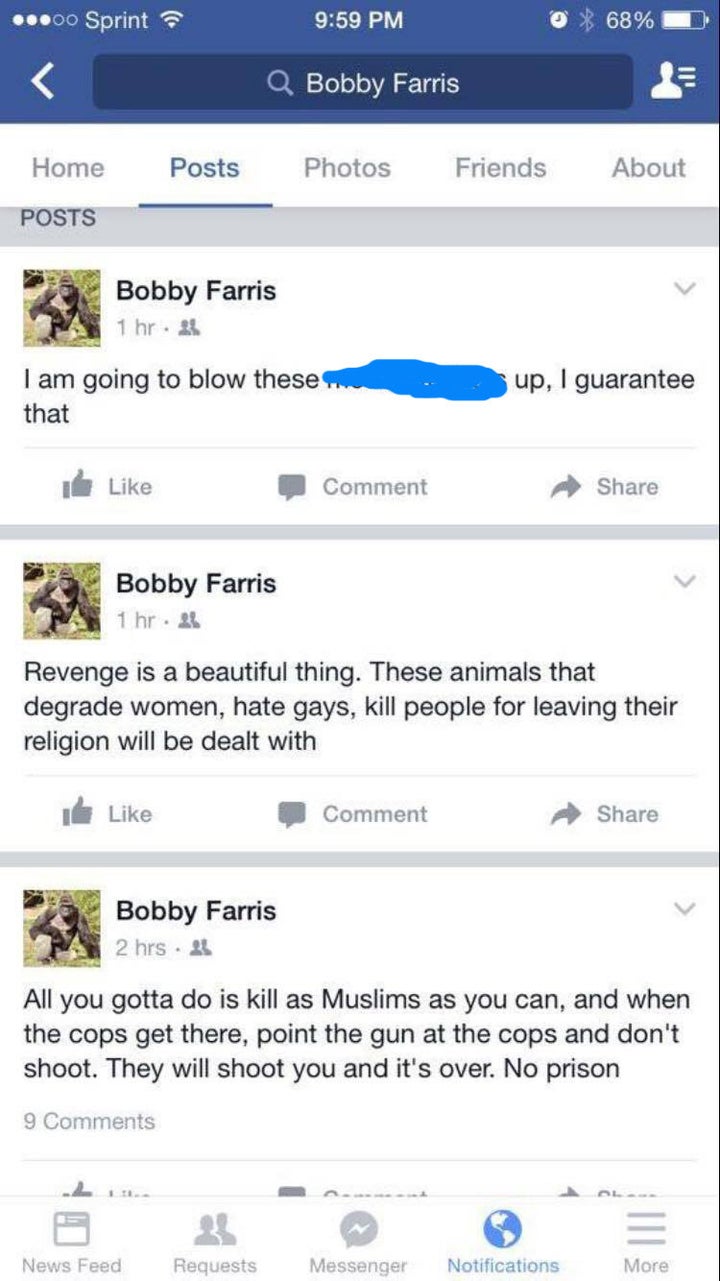 “All you gotta be is a little crazy, have a nice gun and plenty of ammunition and blow Muslims away while they are praying at their satanic mosque,” Farris wrote in another post, according to the police report.

“Revenge is coming my friend,” he continued. “I am going to blow these mother fuckers up, I guarantee that.”

Detective Mark Jamieson of the Seattle Police Department confirmed to BuzzFeed News that another agency in Texas had dealt with Farris for a similar threat made last year.

In other posts, Farris appeared to reference the massacre in Orlando on Sunday night, when Omar Mateen opened fire at the Pulse nightclub, killing 49 and injuring 53.

“America is great. They sell guns to crazy people,” Farris allegedly wrote. “You can buy an AR 15 with 300 rounds of ammunition. If muslims will use this right to kill us, we will use it to kill them.”

Police units were sent to the Idris mosque as a precaution, and a SWAT team went to Farris’ apartment, where a short standoff occurred before Farris surrendered.

Hisham Farajallah, the mosque’s spokesperson, told Seattle’s KOMO News that the police were quick to respond to the threat.

“Definitely, you can’t underestimate any threat. You have to take every threat serious and you have to act accordingly,” Farajallah was quoted as saying.

Farris is expected to have a bond hearing Thursday.