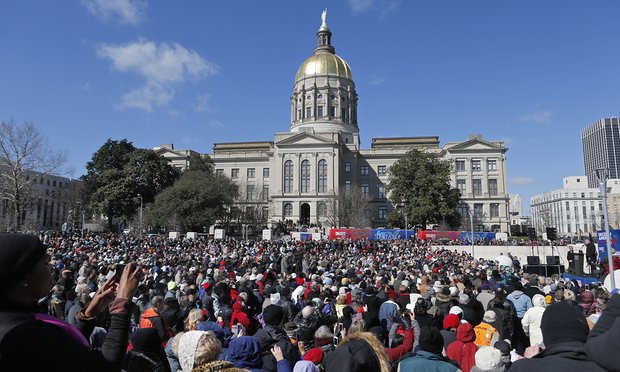 A coalition of more than 400 companies is openly opposing a Georgia “religious liberty” bill that is rapidly heading toward passage, with at least one major company already leaving the state over the proposal.

The proposed law would allow both individuals and organizations to refuse to conduct business with or otherwise discriminate against anyone whose marriage they find counters their religious beliefs. It also protects individuals from existing nondiscrimination laws in Atlanta and elsewhere.

A similar bill was dismissed last year, but the speed at which this year’s version, the “First Amendment Defense Act” (FADA), is moving has raised serious concerns among state lawmakers, business owners, the faith community and activists.

The bill passed both the House and, in a different form, the Senate this month. The most recent version bars the government from taking “adverse action” against a person or faith-based organization that “believes, speaks, or acts in accordance” with the religious belief that “marriage should only be between a man and a woman”.

Telecom startup 373k announced it would to relocate from Decatur, Georgia, to Nevada immediately after the Georgia senate voted in favor of the measure last week.

“I don’t want to be in a state where it is hard to attract the best talent,”said founder Kelvin Williams, who is gay.

Mary Moore, a local business owner, said: “I think there’s been a lot of strong opposition to [FADA] … I think the voices are a lot louder because everybody is now concerned that it’s actually going to pass.”

Based on the over 500 emails he’s received from members of his district and elsewhere, House Representative Taylor Bennett agrees there’s “overwhelming opposition” to the proposed law.

Just in the last week, roughly 100 businesses have joined a coalition of what is now over 400 companies opposing the religious freedom bill. The group Georgia Prospers, of which Moore is a member, includes a range of businesses – from Fortune 500 companies like Delta, Coca-Cola, and Home Depot to smaller ones across the state – in support of “treating all Georgians and visitors fairly”.