The Republican candidate was not pleased that Obama visited a mosque this week. Neither were many of the Americans that Rubio wants to vote for him 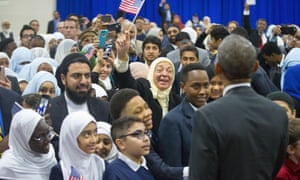 Barack Obama greets children from Al-Rahmah school and other guests during his visit to the Islamic Society of Baltimore on Wednesday. Photograph: Pablo Martinez Monsivais/AP

Barack Obama’s decision to visit a mosque on Wednesday (his first such visit as president) was not popular with Republican candidate Marco Rubio – nor among many American voters if public polling is anything to go by.

Look at today – he gave a speech at a mosque. Oh, you know, basically implying that America is discriminating against Muslims. Of course there’s going to be discrimination in America of every kind. But the bigger issue is radical Islam.

Data isn’t needed to show that many types of discrimination exist in America. But here’s some anyway: 45% of white Americans say that black Americans don’t have the motivation or the willpower to pull themselves out of poverty. One-third of Americans don’t think society should accept homosexuality and 8% of Americans think that adults with intellectual disabilities should all be institutionalized.

Those numbers are besides the point though. Civil rights in the US like freedom from discrimination don’t have to meet a quantitative threshold in order to be respected. Obama’s visit was not motivated by the belief that American Muslims are the most discriminated group in America, it was an effort to explain: “You’re not Muslim or American. You’re Muslim and American.”

Those remarks aren’t just addressed at American Muslims – they speak to the 49% of the country that believes Muslims in America are anti-American. That figure comes from Pew Research, who published a study this week about American opinion towards Muslims. The study found that attitudes varied significantly depending on the respondent’s education level, religion and political values.

The people most likely to say that Muslims in the US are anti-American are those that haven’t finished college, white evangelicals and Republicans (especially conservative Republicans). No surprises, those groups just so happen to be a substantial part of Rubio’s existing support base and the possible voters he’s hoping to snatch from other candidates.

Rubio’s comments about the scale of discrimination against Muslims will also resonate well with those groups. White evangelicals and Republicans were also the Americans least likely to agree with the statement in Pew’s study that “US Muslims face ‘a lot’ of discrimination”. Overall, 35% of all US respondents agreed that anti-Muslim sentiment is not a big deal. Are they right?

In 2014, Pew asked over 3,000 US respondents to rate members of religious groups using a “feeling thermometer” that ranged from 0 to 100: zero indicated the coldest, most negative possible rating and 100 the warmest, most positive rating. Muslims scored just 40.

That score excludes Muslim respondents’ views about other Muslims. The only other group to fare similarly badly were atheists as rated by religious respondents who also scored 40. But there’s a big difference between those two scores: there are far more atheists in America than there are Muslims. Just under 1% of Americans identify as Muslim while 3% of Americans identify as atheist (as well as 4% who say they’re agnostic and 16% who say they’re nothing in particular).

Pew’s study this week also found that those who were most likely to say that they don’t know a single Muslim were those that finished college, white evangelicals and Republicans (especially conservative Republicans).

This matters. Writing for FiveThirtyEight, I’ve found a correlation between familiarity and favorability. The fact that Rubio is speaking to individuals who don’t know Muslims who can challenge their assumptions makes it all the more easy for prejudice to take root.

Rubio isn’t the only candidate to have a support base that is likely to be responsive to such rhetoric. Speaking about Obama’s mosque visit on Wednesday, Donald Trump said: “I think that we can go to lots of places. Right now, I don’t know if he’s – maybe he feels comfortable there” – appearing to imply that Obama is himself a Muslim. What that lacks in factual accuracy is more than made up for by its political acuity. Last September, 29% of Americans (and 43% of Republicans) stated that they believe Obama is a Muslim, according to a poll by CNN and the Opinion Research Corporation.

American attitudes towards Muslims are alarming in part because some individuals will act on those attitudes. In December, criminologist Brian Levin, director of the Center for the Study of Hate and Extremism, found that crimes against American Muslims and US mosques had risen sharply.

As is so often the case, though the data shows correlations clearly, causation is much harder to understand. Does anti-Muslim rhetoric from Republican candidates legitimize existing views, allowing more people to express themselves honestly or does the rhetoric actually encourage more people to adopt those views?

What is less questionable is that Republican rhetoric – whether it’s Trump’s endorsement of a database on Muslims, his calls for Muslims to be banned from entering the country or Ben Carson’s belief that no Muslim should ever be a US president – directly contradicts Rubio’s suggestion that discrimination against Muslims isn’t all that bad.