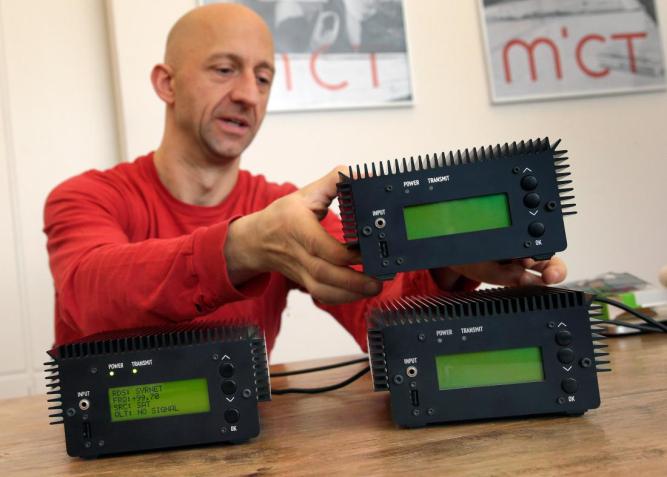 In his Berlin office, Philipp Hochleichter, points to a map of Syria showing the different areas under the control of President Bashar al-Assad, ISIS and various opposition groups. “This is where we have devices,” says Hochleichter, running his hand over cities controlled by each of the parties.

Hochleichter is part of small team in Berlin which has helped launched independent radio stations broadcast inside Syria using small FM radio transmitters, designed and assembled by his team. The small transmitters, called Pocket FMs, allow stations to broadcast discretely to areas that would otherwise be unreachable, including two under the control of ISIS. “We have two devices in [ISIS] regions. One near Mayadin and one near Deir ez-Zor,” says Hochleichter. “We were there before [ISIS] moved in.”

Now he says it would be too risky to try to smuggle the devices into areas controlled by ISIS.

They find a local who knows where the transmitter can be hidden—in abandoned buildings, trees or anywhere not too close to civilian homes. FM transmitters are relatively easy to find using a triangulation method, but so far none of theirs have been discovered. “Our teams are carefully instructed to shut down the transmitters if they suspect tracing or any other kind of danger,” says Hochleichter. They’ve placed 15 transmitters inside Syria and nine are still broadcasting. Each has a range of around five miles.

If someone is caught with a transmitter, the consequences could be dire. ISIS has killed dozens of journalists and activists. The Syrian government has also arrested dozens more.

“We work very slowly, very carefully, with carefully selected staff,” says Hochleichter. “[We’d] rather have our equipment destroyed then bring people into danger or loose transmitters to forces we do not support.”

The organization wants to foster independent, professional media that counters government programming. Before the Syrian uprising started in 2011, the media landscape in the country was much like that under the East German government, says Najat Abdulhaq, a former journalist, who leads the project. It was centralized and mostly controlled by the state and the Internet was restricted.

“After 2011, one of the first things young people did was establish their own online broadcasting,” says Abdulhaq. Those programs called on people to join anti-government protests and reported on the violent crackdowns against them. Some activists produced content in their living rooms and ran with memory sticks to Internet cafés to upload for a wider audience.

The stations supported from Berlin run news, weather updates and music but also crucial information about which streets are safe that day and which checkpoints are open. A show called Alternatives offers survival tips like how to stay warm without feel. Other programs host open discussions about subjects that would never run on state broadcasters, such as compulsory conscription. MiCT doesn’t control content but does have basic guidelines for content and ethics—no hate speech, no calls to arms and fact checking is a must.

In Syria today that leaves few choices. Many of the country’s young, liberal activists and opposition leaders have fled. Two of the MiCT-supported radio stations broadcast out of Turkey, but even that is becoming more and more dangerous. In the past few months, several Syrian journalists and media activists have been assassinated in southern Turkey.