Are US businesses doing enough to support religious diversity in the workplace?

Religious discrimination claims in the US have doubled since 2001. Should businesses take more steps to ensure every employee feels valued? 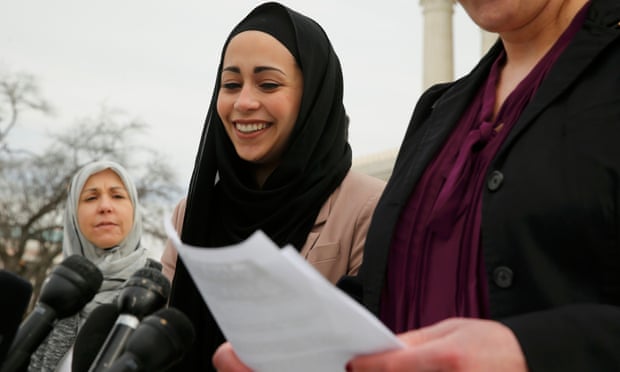 Samanth Elauf stands with her mother outside the US Supreme Court in Washington in February 2015.
Elauf was denied a sales job at an Abercrombie Kids store in Tulsa because of her hijab. Photograph: Jim Bourg/Reuters

Late last year, US food processing company Cargill fired 150 Muslim workers from its beef processing plant in Colorado after a dispute over prayer breaks. After facing protests about the layoffs, the company changed its rehire policy earlier this month, allowing the fired employees to reapply for their jobs. The incident points to a growing challenge in the American workplace: what companies can do to accommodate their employees’ faiths.

The federal Civil Rights Act requires public and private employers to accommodate their workers’ religious needs as long as doing so won’t impose more than a minimal cost to their business. But religious discrimination claims have nearly doubled since 2001, according to the US Equal Employment Opportunity Commission. Last year, a case made it all the way to the Supreme Court, when a Muslim woman sued clothing company Abercrombie & Fitch for passing her over for a job because she wore a hijab, or headscarf. The court ruled 8-1 in her favor.

“Religious discrimination in the workplace is an issue that continues to fester in the US, to the particular detriment of minority faiths like Muslims, Sikhs and Seventh-day Adventists,” said James Sonne, founding director of Stanford Law School’s Religious Liberty Clinic. “The problem often stems from ignorance, but religious or cultural hostility has played a significant role in recent years.”

Hostility toward Muslims has grown in recent years, as terrorists increasingly invoke Islam in attacks in the US and abroad. Meanwhile, the US has seen an increasing number of Muslim immigrants in the past decade.

While companies haven’t traditionally gone to great lengths to address the issue, that is slowly starting to change, according to the Rev Mark Fowler, deputy chief executive officer at the Tanenbaum Center for Interreligious Understanding. “We’ve seen an uptick in companies interested in crafting policies around religious accommodations, implementing quiet rooms or starting a faith-based employee resource group,” Fowler said.

Accounting giant EY (formerly Ernst & Young) said it has found success in building an inclusive environment for its workers. The firm has created “quiet rooms” at its New York headquarters and in all of its Canadian offices, which are open to all employees to take a quick break, to reflect, pray or even to take medication. The company also includes major religious and cultural holidays on its calendar to help set work schedules, as well as a tip sheet that outlines dietary restrictions that should be considered at meetings or events.

“We recognize that our people come from different cultures and backgrounds, so we strive to build an inclusive workplace culture where everyone can bring their authentic selves to work,” said Karyn Twaronite, EY’s global diversity and inclusiveness officer. “Establishing these initiatives allow us to ultimately recruit and retain top talent, including top diverse talent.”

EY’s strategy reflects the two most common worker complaints: the inability to get time off to observe religious holidays, and having limited or no food options, such as kosher or vegetarian dishes, to accommodate their religious beliefs at work functions. Company policies that prohibit the wearing of religious attire like a headscarf also draw many complaints, said Maha Sayed, a staff attorney at the Council on American-Islamic Relations, which receives hundreds of employment discrimination complaints each year.

Typically a letter to remind the company of its obligation under US law is enough to resolve conflicts. If that doesn’t work, a complaint can be filed with the US Equal Employment Opportunity Commission, which investigates employment discrimination complaints.

Business can avoid legal entangling by being proactive, which doesn’t have to be a complex undertaking. Creating a policy for an office might be simpler than, say, in a factory, where greater safety concerns and pressure to meet production deadlines could make scheduling a bigger challenge. Even then, solutions exist. Factories, for instance, should look at how they allocate breaks throughout the day for lunch, smoking or bathroom use, and assess whether they could set aside breaks for praying.

“Employers often think that religion needs to be treated differently than other facets of work-life accommodation, but in many instances the practices a company already has in place can be used to accommodate religious beliefs and practices too,” Fowler said.

While companies are supposed to accommodate their employees’ religious practices, they don’t have to if it causes “undue hardship” or it costs too much money. What’s considered a moderate expense is subjective, however. For instance, a Jewish truck driver in North Carolina sued his employers in 2012 after he was fired for not showing up for work on Saturdays to observe Shabbat, a day of rest that starts at sundown on Friday and ends Saturday night. When a driver missed work, the company was forced to hire an independent contractor, which cost a lot more money: the company paid its employees $100 a day to operate its own trucks, while hiring an outside person to do the job cost $50-$100 an hour. The court ruled in the company’s favor, stating that the higher cost was considered an “undue hardship”.

Being accommodating doesn’t necessary mean losing employee productivity. As an Orthodox Jew, Moish Soloway, communications director at marketing and advertising firm the 9.8 Group, leaves work early – no later than 2pm on Fridays during the winter to observe Shabbat because the sun sets earlier during the cold months. He also takes religious holidays that often fall in the middle of the week. Soloway said he often gets to the office an hour before most of his colleagues and leaves work on the later side. He also tries to make himself available on Sundays and national holidays such as Christmas.

“I was very upfront about my religious needs with my employer and never experienced any problems,” he said. “Of course, that means I have to go the extra mile not to take advantage of them being accommodating.”

For small companies, a lack of bureaucracy can speed up the decision-making process for accommodating special needs. But small firms tend to have leaner budgets, so they still need to consider the tradeoffs. At SEO Fife, a five-person internet marketing company, management has figured out a way to accommodate an Amish employee: he works from home, where he handwrites everything on paper. Someone else at work then keys-in the notes on a computer.

“We allow him to work remotely, as the office would be an overwhelming environment for him,” said co-founder Sam Williamson. “He has very little exposure to technology, and the Amish are very family-oriented, so working from home is ideal.”

Ultimately, companies need to think creatively and approach the issue not from a defensive standpoint to avoid litigation.

“We’re dealing with new territory here,” said Robert Jones, founder and CEO of nonprofit the Public Religion Institute. “We now have enough religious minorities in the US reaching a critical mass, and it’s something that schools and business are having to wrestle with in a new way.”

Tagged as: Workplace and Religions