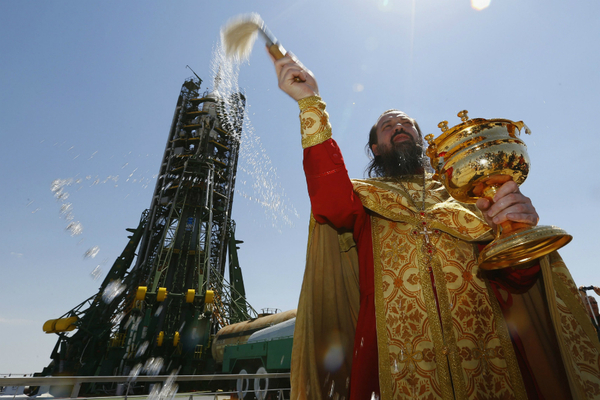 The Muslim Times’ collection, promoting secularism in every country of the world

MOSCOW — Baikonur Cosmodrome may lie in Kazakhstan, but it is an iconic symbol of modern Russia: the coming together of cutting-edge science and Space Age power.

But just before the mid-December blastoff of the latest Soyuz mission to the International Space Station, the countdown procedure was halted to allow a robed and bearded Russian Orthodox priest a few minutes to shuffle around the mighty rocket, sprinkling holy water on its fuselage, murmuring snatches of biblical verse, and calling upon God to keep it safe. He also blessed each of the three astronauts – American, Russian, and British – about to make the journey.

Such is the new normal in today’s Russia. The 1993 Constitution strictly defines Russia as a secular state, in which no religion is the official or obligatory one. But many people in post-Soviet Russia yearn for ideological certainties to fill the void left by communism. And with the ascent of Vladimir Putin and Russia’s new order, the Russian Orthodox Church, an ancient institution that was nearly annihilated during seven decades of Soviet rule, is returning to a highly visible and central role in the life of the country.

Furthermore, the line between sacred and secular appears increasingly blurred in Russia. Unlike in the West, where religion and politics occupy separate spheres, the Orthodox Church sees itself as the spiritual generator of public policy and the ideological bulwark of the state. Priests have become regular fixtures in the Army, schools, hospitals, and other public institutions. When President Putin gave his recent state-of-the-nation address to parliament, Patriarch Kirill – the Orthodox equivalent of the pope – was seated prominently among top government officials in the audience.

That has prompted leaders to supplement their dubious democratic legitimacy with backing from the church that’s been a key pillar of Russian statehood for 1,000 years.

“The main idea our temporal authorities are offering these days is a return to Russian ‘great power’ status,” says Nikolai Svanidze, a historian and leading TV personality. “What the church brings to that is historical depth, clear philosophical outlook, and cultural traditions that most Russians relate to.

“But it’s a hopelessly archaic institution, profoundly reactionary, and with a long habit of subordinating itself to the state,” he adds. “It’s incapable of taking any kind of progressive stand in favor of the country’s development, and together with our current authorities it is driving Russia down the blind alley of the past.”