The largest mosque in Japan opened its doors on November 20 near the central Japanese city of Nagoya, heralding a new chapter in the East Asian nation’s relationship with Islam.

Islam has never made more than a marginal impact on Japan, although the history of Japanese relations with Muslims stretches back further than most people imagine, the Japanese included.

The first mosque in Japan, the Kobe Muslim Mosque, opened in October 1935 and remains a centre for prayer more than 80 years later. Several dozen other mosques have since opened around the country, serving as community centres for a Muslim population numbering in the tens of thousands. 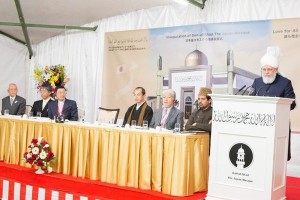 The first Ahmadi Muslim missionary arrived in Japan in the same year – 1935 – but it is only now that this minority community has had the resources to build its own centre, the Bait ul-Ahad Mosque. They have done so on a grand scale, building the Japan’s biggest mosque with a capacity in its main chamber for 500 people to be at prayer.

The opening ceremonies were attended by a range of guests, including a Japanese politician and local city officials, as well as leaders of the Ahmadi Muslim community from around the world. At the head of the guest list was Caliph Mirza Masroor Ahmad, the supreme leader of the 20 million-strong global Ahmadi community.

“This is a milestone of our progress,” Caliph Ahmad told Al Jazeera. “If this mosque is preaching the message of love, peace, and harmony, naturally people will be attracted to it.”

The main distinction between the minority Ahmadi Muslim community and the majority of Muslims is the former’s belief that Mirza Ghulam Ahmad (1835-1908) was the foretold messiah and mahdi who brought his followers back to the spirit of the original Muslim community at the time of the Prophet Muhammad.