Canadian scientist put on leave for his song ‘Harperman’

Is the Harper government at war with science?

A scientist with Environment Canada has been put on administrative leave with pay pending an investigation for creating apolitically charged protest song about ousting Conservative Leader Stephen Harper.

Tony Turner, a physical scientist at Environment Canada and longtime singer-songwriter in Ottawa’s folk music scene, wrote the controversial tune Harperman. Turner was sent home in mid-August, according to his union, over concerns that his song breached Environment Canada’s value and ethics code.

The song touches on the Duffy trial, Harper’s spat with Chief Justice Beverley McLachlin and includes highly political lyrics like “Who muzzles the poor scientist?” and “Won’t buy into climate change until it’s sold on the stock exchange.” Its chorus ends with the blunt line “Harperman, it’s time for you to go.”

Turner has been a public servant for nearly 20 years and was planning to retire in roughly one month. He was working on a project involving migratory birds.

Debi Daviau, president of the Professional Institute of the Public Service of Canada (PIPSC), confirmed to CBC News that Turner is under investigation. PIPSC is the union which represents federal scientists. 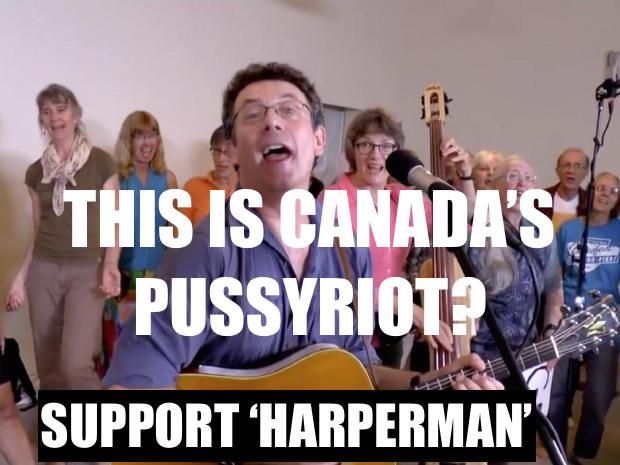 “[Environment Canada] is alleging … [Turner] has violated the departmental code of values and ethics in that the writing and performing of this song somehow impeded his ability to impartially study migratory birds,” she said.

“There doesn’t seem to be a lot of formal grounds to base this in and certainly the courts have been loud and clear on the matter of how public servants can legitimately participate in a federal election.”

A spokesperson for Environment Canada wouldn’t comment on the case, citing privacy, but said public servants are expected to comply with the values and ethics code, regardless of their job.

Turner told CBC News he is not speaking to media while the investigation is ongoing.

‘The entire song you could take out of news clips’

A video for the song was recorded in June and posted on YouTube, where it has racked up more than 50,000 views. The video includes more than 40 different singers who belt out the chorus. They’re fronted by Turner on guitar.

Diane McIntyre, 67, sings the first solo in the music video. She’s never worked for the federal government but closely follows federal politics. She told CBC News she wanted to take part after reading its lyrics.

“The entire song you could take out of news clips. I mean, it’s all truths,” she said.

“There are no invented misdoings by the Harper government, they’re are all the real ones and they’re all there.”

“There wasn’t a vindictive thing said. It was just truth put to music,” she said. “I’ll stand behind Tony Turner until the end of time.”

Turner made the music video in collaboration with his friends Andrew Hall and Chris White. They’ve organized a campaign around the song (they’re selling T-shirts) and are planning a nationwide sing-along in mid-September, which will include singers on Parliament Hill.

Since word of Turner’s suspension got out late last night, #harperman has been trending on Twitter.