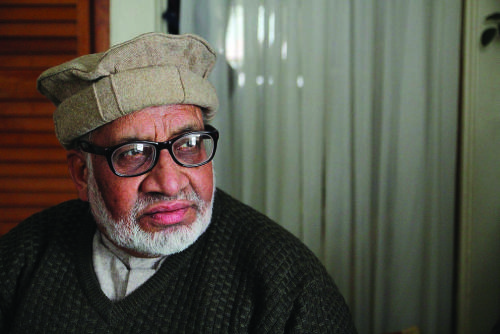 Bashir Mehmud the President of the Fitchburg chapter of Ahmadiyya Muslim Community at his home in Fitchburg on Friday. (SENTINEL & ENTERPRISE/JOHN LOVE)

FITCHBURG — The response to cartoons that degrade and insult Islam needs to come from the pen, not the sword, according to local Muslim leader Bashir Mehmud.

Mehmud, 72, is president of the Fitchburg Chapter of the Ahmadiyya Muslim Community. Like most Americans, he was appalled over the murders in France this week by Muslim terrorists enraged by critical and obscene cartoons in the satirical newspaper Charlie Hebdo.

“Our heart goes to them,” Mehmud said of the 12 victims. “Islam does not allow this.”

Locally, the Ahmadiyya Muslim Community has held blood drives as a response to terrorist attacks like 9/11 and the Boston Marathon bombing and speaks out against terrorist groups. Mehmud said violent Islamic groups twist the words of Mohammed.

Mehmud said all of the major religions condemn violence and said violent extremist groups like the Taliban and ISIS are fringe cults. He compared them to David Koresh, the Christian cult leader who was killed in an FBI raid in 1993 following an armed conflict and a siege.

“The holy Quran says if you kill a person, it is as if you have killed all human beings,” said Mehmud. “Mohammed never said if you are insulted you kill someone.” He said the prophet never instructed people to kill.

Some other Muslim factions have interpreted the Quran to say that it is wrong to kill other Muslims, but not necessarily all people, but Ahmadiyya Muslims see it as a universal rule for all human beings.

In Mehmud’s birth country of Pakistan, Ahmadiyya Muslims are not considered Muslims. The sect was founded by Mirza Ghulam Ahmad in India in 1889 in an attempt to revive Islam, but orthodox Muslims consider him to be a false prophet.

As a result, Ahmadiyya Muslims has been targeted by terrorist groups, many of them affiliated with the Taliban.

Mehmud said Muslims are often the victims of… read more at sentinelandenterprise.com