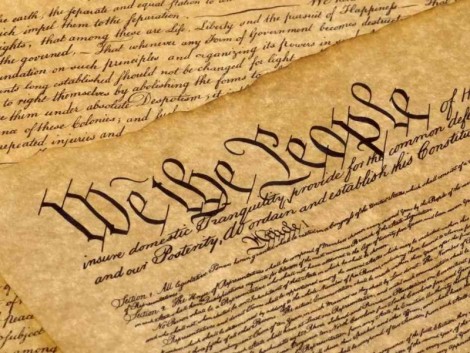 Constitution for each country is a fairly precise document, but still requires constant interpretation and reinterpretation.  The Shariah on the other hand is a fairly amorphous concept as it triggers different ideas in different people, depending on their life experiences.

The original text of the USA constitution, with its seven articles, was less than 5000 words, but, there is no one or a few documents that could be referred to as Shariah Law.

The most shining of all the constitutions in the world is constitution of America, with its more than 200 years of successful history and record of constant evaluation in the USA Supreme court.  So, when talking about constitution we should try to examine American Constitution, its history and its benefits.

“As the British Constitution is the most subtle organism which has proceeded from the womb and long gestation of progressive history,” said William Gladstone, who served as British Prime Minister on four different occasions, between 1868 – 1894, “so the American Constitution is, so far as I can see, the most wonderful work ever struck off at a given time by the brain and purpose of man.” 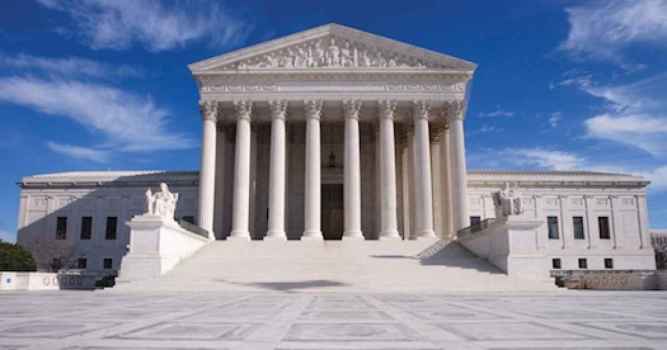 The USA Constitution originally consisted of seven Articles. The first three Articles embody the doctrine of the separation of powers, whereby the federal government is divided into three branches: the legislature, consisting of the bicameral Congress; the executive, consisting of the President; and the judiciary, consisting of the Supreme Court and other federal courts. The fourth and sixth Articles frame the doctrine of federalism, describing the relationship between State and State, and between the several States and the federal government. The fifth Article provides the procedure for amending the Constitution. The seventh Article provides the procedure for ratifying the Constitution.

The Constitution was adopted on September 17, 1787, by the Constitutional Convention in Philadelphia, Pennsylvania, and ratified by conventions in eleven States. It went into effect on March 4, 1789.

The Holy Quran says that whatever benefits humanity is given permanence in the world.  It states, “He (Allah) sends down water from the sky, so that valleys flow according to their measure, and the flood bears on its surface swelling foam. And from that which they heat in the fire, seeking to make ornaments or utensils, comes out a foam similar to it. Thus does Allah illustrate truth and falsehood. Now, as to the foam, it goes away as rubbish, but as to that which benefits men, it stays on the earth. Thus does Allah set forth parables.” (Al Quran 13:18)

The Constitution of the United States was the first detailed constitution of its kind, and has influenced the constitutions of many other nations and today more than 300 million people are living peacefully with their religious freedoms, in USA, as a result of it.  So, it has certainly benefitted men and has gained permanence in the earth.

Shariah means different things to different people.  To me it means discharging ones obligations to God and the fellow humans, regardless of color, creed, gender and religion, as so often stressed by the Messiah, Mirza Ghulam Ahmad Qadiani, the Founder of the Ahmadiyya Muslim Community and the leaders, referred to as Khalifas, who have followed him.

There are at least three hundred verses in the Holy Quran that inspire mankind towards a compassionate living, a few dozen talking about justice and at least a few from which the Golden rule, “Do onto others like you would like to be done to you,” can be derived.[ii] [iii]

Yet zealot Muslims, who crave about introducing Shariah Law, are talking about enforcement of a few deterrent punishments suggested in the Quran, for example, cutting of hands of thieves and flogging of adulterers.

The Sultan of Brunei announced this month the gradual introduction of harsh Islamic punishments, such as death by stoning for adulterers, severing of limbs for theft and flogging for a wide range of crimes including abortion and consumption of alcohol.

The amendment is the latest step in the wealthy, all-powerful monarch Sultan Hassanal Bolkiah’s move towards a conservative Islamic state, but will only apply to the Southeast Asian nation’s majority Muslim population.[iv]

Perhaps, the Sultan himself could be the first recipient of the cutting of hands, if he is unable to explain by what right, he has misappropriated or robbed the leadership of the country for himself.

The world’s first movable type printing technology was invented and developed in China by the Han Chinese printer Bi Sheng between the years 1041 and 1048. In the West, the invention of an improved movable type mechanical printing technology in Europe is credited to the German printer Johannes Gutenberg in 1450. The exact date of Gutenberg’s press is debated based on existing screw presses. Gutenberg, a goldsmith by profession, developed a printing system by both adapting existing technologies and making inventions of his own. His newly devised hand mould made possible the rapid creation of metal movable type in large quantities.

For the West it has meant five centuries of increasing awareness among the masses, increasing individual rights and respect for the due process.  The Muslim monarchies in the Ottoman Empire and the Mughal Empire in India and others, refused to benefit from these inventions and prevented mass education, to prevent the struggle of the ‘have nots’ against the ‘haves,’ and defended their monarchies, in so doing.  The result has been fairly visible.  It has meant five centuries of the beating and humiliation of the Muslims, militarily, politically, economically, intellectually and emotionally, at the hands of the non-Muslims.

How would the Muslims respond to his humiliation and malaise in their societies?  The response has been varied.

One successful response was mounted by Ata Turk in Turkey, in the creation of the modern state.

Hijab was banned in Turkey for so many years and now the ban has been lifted and yet morality of Islam has survived, decades later, showing us that life or death of nations and countries, does not depend on one or a few teachings.

But, many fundamentalist Muslims especially their power hungry Mullahs suggest that only solution to the centuries of malaise is introduction of few laws of Shariah.  They seem to believe that cutting of hands and flogging of a few adulterers is some magical wand that will immediately fix the problems of the Muslims.

In this information age, it is becoming increasingly apparent that the life of nations depends on their financial, political and judicial systems.  The three systems seem to be intertwined and closely linked as can be seen in the working of any modern Western country.

How can cutting of a hand or both or a finger or an arm of a thief versus putting him or her in jail, be the panacea to build modern, successful and sustaining societies?

In modern societies there are hundreds of laws in the judicial system to cover different eventualities and exceptions and these have been dissected, examined and modified over centuries of constant intellectual scrutiny.  The Muslim fundamentalists want to throw away all this learning with one stroke and go back to medieval times.

The constitution of USA does not specify any religious beliefs, otherwise the country would be choosing one religion at the expense of others.  As a matter of fact the word God does not appear in the original constitution.  It starts off by stating its objective, “We the People of the United States, in Order to form a more perfect Union, establish Justice, insure domestic Tranquility, provide for the common defence, promote the general Welfare, and secure the Blessings of Liberty to ourselves and our Posterity, do ordain and establish this Constitution for the United States of America.”  Then it goes into the seven articles that it comprises of, which are divided into sections.

Ireland, as one example of a non-Muslim country and almost all the Muslim countries have not learnt from the success of USA, for more than two centuries, to talk only about humans and human affairs and not sew the seed of misinterpretation, by getting into religion or even God.  The preamble of the Irish constitution starts, as follows:

In the Name of the Most Holy Trinity, from Whom is all authority and to Whom, as our final end, all actions both of men and States must be referred,

We, the people of Éire,

Humbly acknowledging all our obligations to our Divine Lord, Jesus Christ, Who sustained our fathers through centuries of trial,

Gratefully remembering their heroic and unremitting struggle to regain the rightful independence of our Nation.

Now, as many believe Triune God does not exist, the constitution has started on the wrong footing, as far as they are concerned.  For them the constitution is meaningless and when and if they agree to it, it is no more than mere lip service.

The constitution of Pakistan starts off with the line, “Whereas sovereignty over the entire Universe belongs to Almighty Allah alone, and the authority to be exercised by the people of Pakistan within the limits prescribed by Him is a sacred trust.”  As a devout Muslim, I must confess that this line has an emotional appeal for me and most Muslims.  But, this would be our knee jerk reaction.  Deeper analysis suggests that the very first line of constitution is sewing the seed for a convenient hijacking of the state into a theocracy.  This is indeed what happened.  The constitution was passed in 1973 and in the very next year it partly changed into a theocracy, by marginalizing the Ahamdiyya Muslim Community, by declaring them non-Muslims for the purpose of law and constitution.

The modern means of travel and interaction have changed our world into a global village and the more we focus on co-existence among people of different faiths, the more we realize that Separation of Mosque-Church and State has become an absolute necessity for our modern times.

The Worldwide Head of the Ahmadiyya Muslim Community, Hazrat Mirza Masroor Ahmad has been stressing this separation in his various keynote addresses, in different countries of the world.

On 28 September 2013, he held an audience with more than twenty Indonesian guests representing various media, educational institutions and think-tanks at the Taha Mosque in Singapore.  It was covered by a Press release by the community titled, True Khilafat compatible with Democracy.

During the 70 minute question and answer session, he explained the true teachings of Islam and clarified various misconceptions concerning Islam.

In answer to a question about whether Khilafat and democracy are compatible, Hazrat Mirza Masroor Ahmad said:

Khilafat has no relation to government or politics. When Ahmadiyyat spreads far and wide the Khilafat will play no role in government and will never interfere with matters of State. We have no political ambitions or desires. We believe entirely in a separation of religion and matters of State.[v]

The wisdom mentioned in the many of the Islamic teachings, when we try to understand their essence, rather than pushing their literal understanding, is not debarred from constitutions of Muslim or for that matter non-Muslim countries, and should certainly find their way into the laws and constitution, but, only through civic process so that everyone can buy into them, regardless of their religious biases.